L’Atelier Patisserie Boulangerie has a new space and a new name. L’Atelier used to be a hidden treasure of Mount Pleasant. They had a tucked away, blink and you’ll miss it location just off Main St at East 5th. The biggest clues that gave away their location was the morning weekend crowd and the irresistible smell of cooking croissants. But now they have a new space, and in a stunning feat of synchronization, they only had to close for three days to make the move. Granted, it was only a few blocks East. Now L’Atelier Patisserie Boulangerie is located on East Broadway, a little closer to Fraser, while still within easy reach of the Main Street crowd. 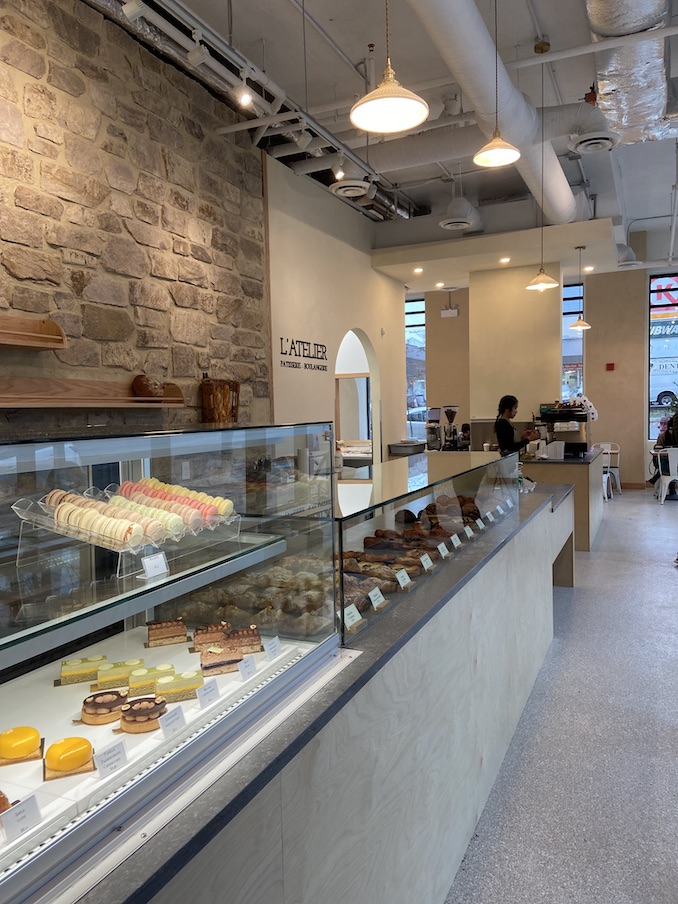 The new location at 599 East Broadway offers Franck Buiron, the owner and head pastry chef, a lot more room both in terms of cafe space and kitchen space. There’s no need now for the commissary kitchen that Buiron was previously using. Hence, the expanded menu. For example, Paris brest used to only be available on weekends but this classic made with choux pastry and hazelnut cream is now available daily.

The old space really only offered a small patio for customer seating. This new space makes the most of its corner location, with the long display counter leading customers around to the seating area and coffee condiment stand. Previously unoccupied for four years, the interior is brand new and was designed especially to suit L’Atelier’s needs. Buiron himself did a lot of the finishing touches, from plastering the walls, to painting the stonework, to laying the tiled patterns that decorate the table tops. Perhaps that’s why it has the warm ambience of the Mediterranean. Buiron is from the south of France where they do things a little more casually than they do in Paris. The space is a true labour of love for Buiron and it is palpable how passionate he is. Thankfully for us, his passion is also expressed in edible form. 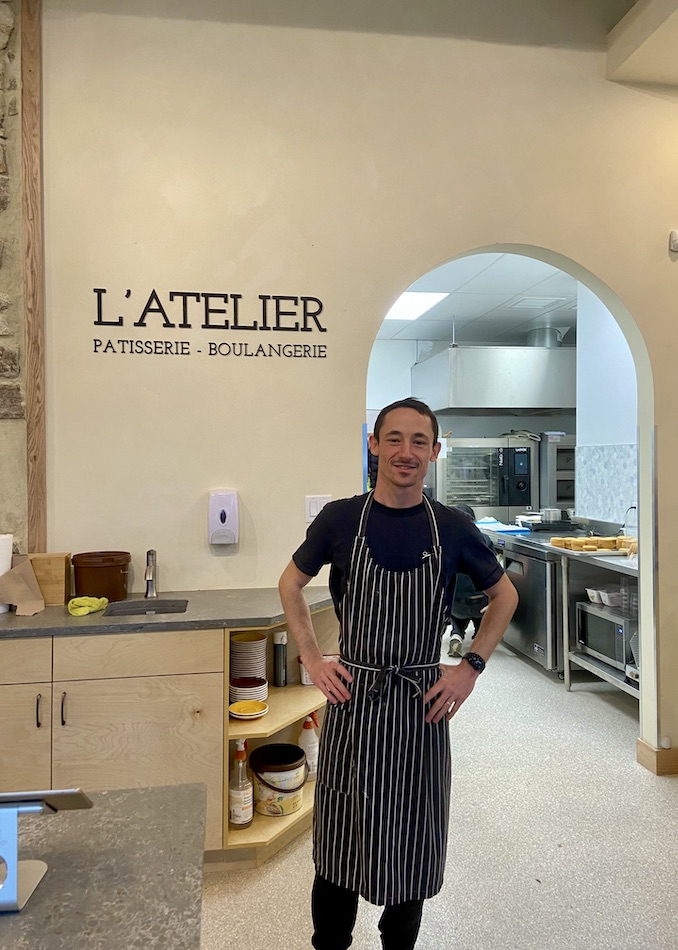 But Also A Boulangerie

Previously, L’Atelier was specifically a patisserie, as the name declared. However, with the new bigger space, Buiron needed a bigger name as well. L’Atelier is now both a patisserie and boulangerie. If your French is a little rusty, boulangerie means there will be bread. L’Atelier will be offering a traditional French baguette as well as a county loaf, and sourdough is coming soon too. The baguette has a satisfyingly crisp exterior with a soft, supple, white interior. I enjoyed it on its own, and also as a means of soaking up the last of a spicy homemade tomato sauce. 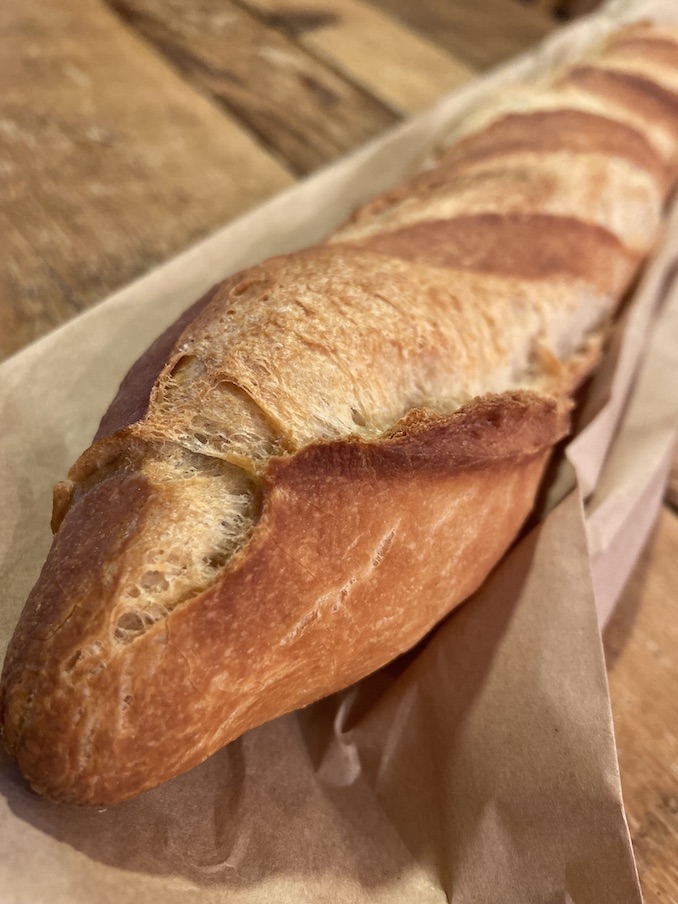 By adding a boulangerie, L’Atelier gives itself a blank bread canvas to play with, and a bigger sandwich menu is on its way. For now you can get the mimosa egg croissant sandwich and the smoked salmon baguette sandwich. I personally would absolutely love a simple butter, ham, and cheese baguette, s’il vous plaît. I also heard talk of possible brunch items joining the menu as well so keep an eye out. There will be a few buche de Noel for the holiday season too.

As I mentioned, L’Atelier began exclusively as a patisserie. The quality and flavour of the neighbourhood’s much loved favourites are the same. But Buiron’s exquisite cakes and pastries look even more alluring in their new well lit display. The lemon tart is one of my favourites. It is an adorable mini lemon pie topped with torched meringue. While the luscious yellow and green matcha passion fruit cake and the shining, glazed apple tartin certainly compete for the prettiest of the pastries. All of the cakes can also be made full size. 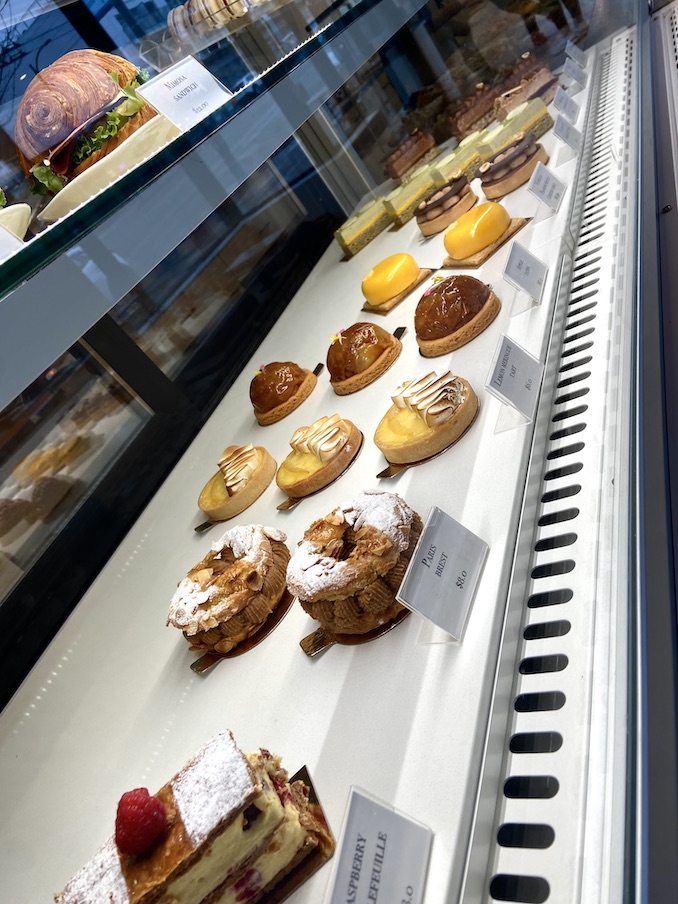 L’Atelier offers a range of croissants from butter and pain au chocolate to the decadent double chocolate croissant. There are also croissants of the double baked variety, including the fan favourite double baked pistachio pain au chocolat. I tried something I’d never seen before: the laminated brioche. Laminated like flaky croissant dough but sweet like brioche making a delectable combination. A perfect, not overly sweet pastry to dip into your latte. L’Atelier serves a selection of coffee and tea drinks, as well as matcha, and a French cafe classic, orange juice. 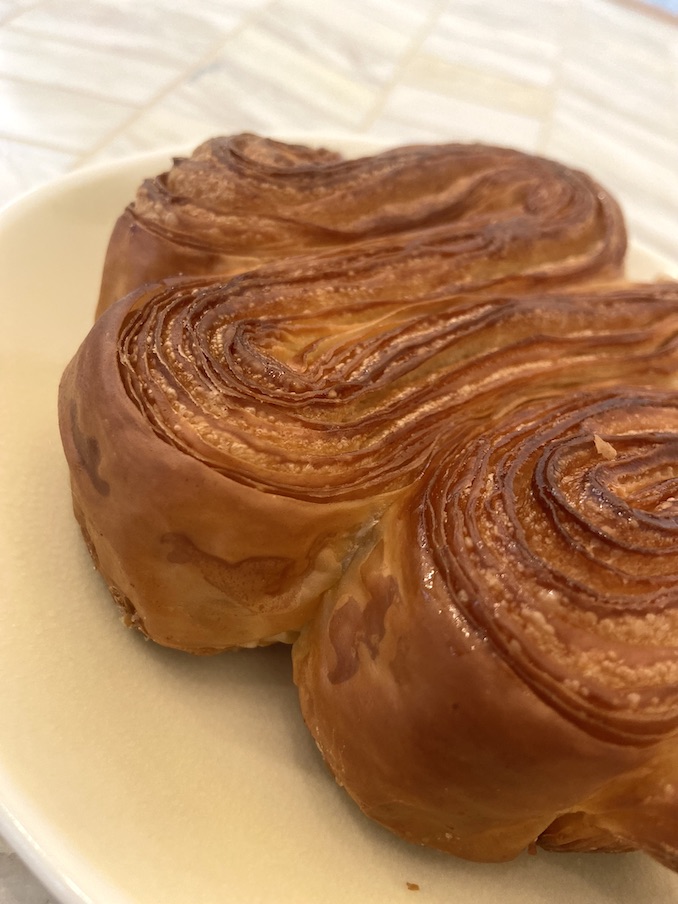 L’Atelier is open Tuesday to Sunday 8am to 5pm. Check out the brand new space at 599 E Broadway.

If Vancouver is known for one thing, it’s Gastown. And maybe the rain. But mostly Gastown. From the iconic steam-powered clock to the oddly cozy atmosphere of the brick buildings and streets, Gastown has rightfully […]

After browsing the Vancouver archives for our previous history post on Old Photographs of Cars in Vancouver from 1900-1920, I thought I would do a similar post with boats. As there were so many amazing […]

Popping up with Lucky Bepo Ramen

Lucky Bepo Ramen is literally popping up all around Vancouver. This past Friday, I checked out their ramen pop up at Wicked Cafe. The Pop Up As I approach the cafe, I can see a […]