The Vidos recently released their new single “Boomshackalacka” via exciting new Canadian rock label Rock Is Dead Records and all streaming platforms. Undeniably catchy, with groovy, retro vibes and covered in witty lyricism, “Boomshackalacka” is an upbeat tune that proves difficult to ignore. The song is the first single off The Vido’s forthcoming album and follows the band’s previous releases “Car Trouble” and “Perfect Stranger”, singles that each cracked the Top 40 on Canadian Active Rock charts. 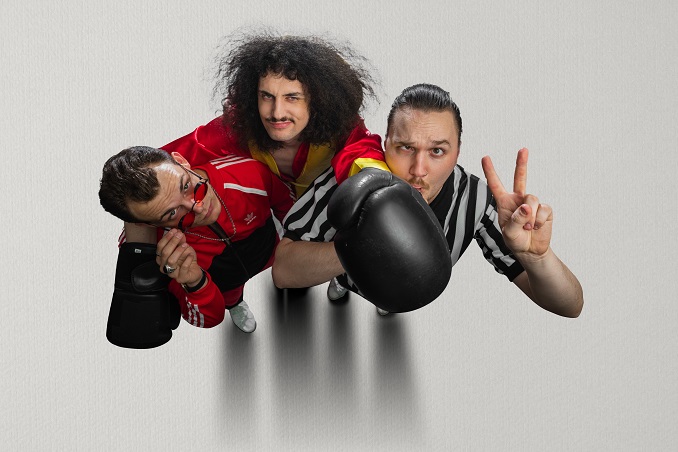 According to the Mayan calendar, we formed exactly 16 months before the end of the world: August 2011. 11 years and running! Or jogging I suppose.

We released our first album of demos on December 21st, 2012 (just to make sure everyone in the world had a chance to hear our godliness). From there we tightened up the track listing and released 3 EPs full of singles to hold over the world’s hunger for more Vidos while we quietly prepared our forthcoming debut album “Right in the Kisser”.

100% unquestionably Chad Smith (Red Hot Chili Peppers). That dude made me wanna play drums for the rest of my life.

Really been getting down with everything George Daniel (The 1975) has been doing these days. Learning some of their songs and watching them play live has opened up a completely new style of playing for me, as well as live sound production. Very inspiring stuff coming out of his camp.

Oh man where do I begin, my music playlist is always under 20 songs and they’re all guilty pleasures. Right now I’d have to go with “Soak up the Sun” by Sheryl Crow.

We don’t really have a team ritual, however, everyone seems to have their own individual ones. Kirk always needs to burn his hands in scolding hot water for like 2 full minutes and then wipe them down with a beach towel – he brings that baby everywhere. Brett has his scream box… a custom-fitted soundproof box that slips over his head. We don’t know if he’s practicing vocals or getting a quick FaceTime confession in with his pastor in there, no one will ever know. And me, Nolan Nielsen? I’m definitely a 2 beer badger. Something about downing 2 beers an hour before the show allows me to sit perfectly in the pocket of the click track we play along to. No more and no less than 2 though! It’s just like darts or billiards, hitting that groove is very fragile.

Both! As my uncle who died tragically early of congestive heart failure always said, sleep is for suckers.

Haven’t been on the road in 3 years, so right now I’ll say road. Ask me again after I tour with these jerks for two months and want them both dead.

We’ve got our debut album coming out sometime in February on Rock Is Dead Records and we’re very stoked about it.

Formed in the underbelly of the Vancouver punk music scene in 1994, the band was a sneering, snotty, slap in the face to the Seattle grunge scene. Their raucous live shows, particularly an electrifying performance […]

Raw, feral, anthemic music for the underdogs – Strange Breed is the shift in alternative rock that you’ve been waiting for. Reminiscent of 90’s femme-rock heroines like Veruca Salt, L7, Hole and Sleater-Kinney while channelling […]