Say Hey Cafe is located in Vancouver’s Chinatown, at 156 East Pender St, in the same block as the famed Chinatown bakery, New Town. 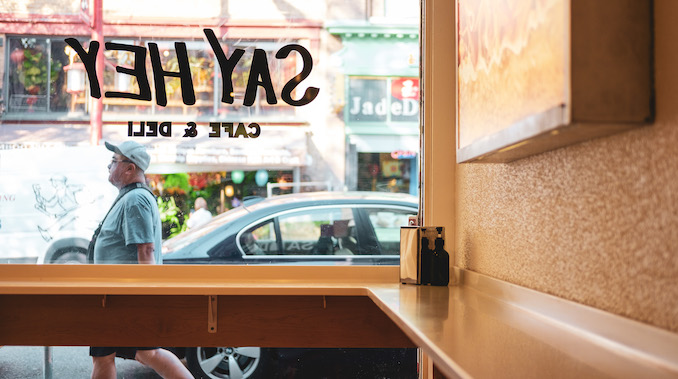 Zach Zimmermann first opened Say Hey Cafe in 2017. It then closed during the pandemic, as so many other restaurants did. At the time, Lina Caschetto was living in Paris locked down, but when she returned to Vancouver, she connected with Zimmermann and they began working to re-open the space. After a successful kickstarter campaign built on the fandom Say Hey had already cultivated, the hoagie shop re-opened in March 2022.

With the re-opening, Caschetto stepped into her new role as culinary creator and leader. The Meatball Hoagie is the only OG sandwich that remained on the menu but even it was tweaked and improved. The new menu is impressive and inclusive, offering a range of meat Super Heroes as well as a selection of Vegetarian Anti-Heroes, all on your choice of a signature sesame roll or hoagie bun.

Caschetto is generous with portions and with flavour. This is not your basic ham and cheese and lettuce sandwich that you could make yourself at home. First of all, the bread is fresh and soft. The quality of the house made meats is excellent. The house made sauces are fantastic, whether it be the tantalizing smokey chill mayo on the Richie, or the delectable miso anchovy caesar dressing on the Cardini. Garnishes like fried shallots, pickled Serrano peppers, and brown butter bread crumbs take these sandwiches to a culinary level that is unusual for a grab and go food item.

The set menu has plenty of tasty options to try, but Say Hey Cafe features seasonal specials as well. I got to Say Hey for my interview with Caschetto a little early. I said hey to the woman behind the hoagies, saw a Hot Vickie delivered to a waiting customer, and stepped outside to check in with my photographer. The Hot Vickie is a seasonal special. By the time I came back into the cafe, the customer was thanking Lina for his sandwich and heading out. He’d downed the entire thing in about five minutes. 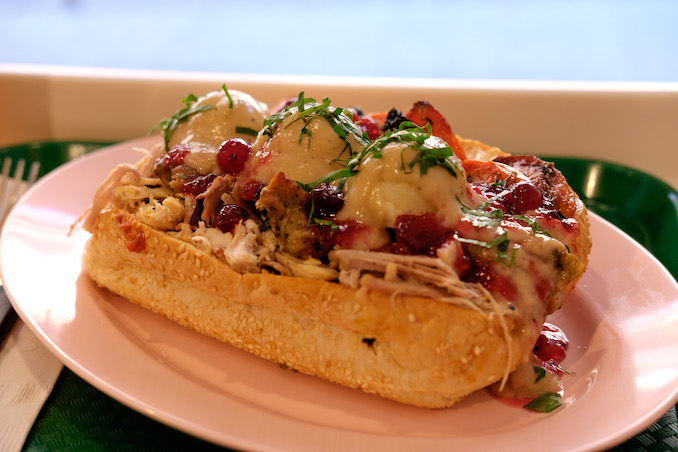 Now, that speedy consumption would be impressive for any of Say Hey’s full hoagie sandwiches because they are all mighty and substantial. But the Hot Vickie is truly a feast. It’s a roast turkey dinner in a hoagie bun, complete with buttery mashed potatoes and gravy. Sloppy and delicious, there’s a reason why its only sold for dining in. A take home meal kit version is in the works for Christmas for anyone who doesn’t want to undertake making a full roast turkey dinner themselves, or for anyone who attended a dinner and didn’t get to go home with any leftovers. 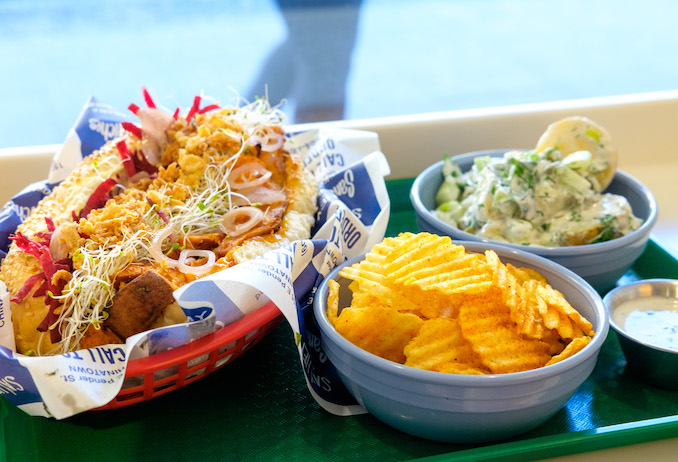 As well as sandwiches, Say Hey has a selection of sides such as a daily soup and salad. But the house seasoned chips and dip have to be tried. I know what you’re thinking. Oh sure, plain Ruffles chips warmed and tossed in house made seasoning, how good can they be? Really really good. The seasoning is a fantastic combination of BBQ and All Dressed. They’re super crave-able, or “moreish” as the Brits say. I may just have to pre-order a bigger portion of chips and dip for my next party. Speaking of parties, Say Hey Cafe does offer catering if you want to host a make-your-own-hoagie party at home. Plans are also in the works to sell their house turkey and roast beef as well.

Drinks options go beyond the usual cafe offerings of bottled beverages. Say Hey has an herbal tea based “Very Cool-Aid.” They also serve an “Apple of My Eye-ce Tea” which includes a house brewed shrub made from fruit cuttings that was particularly refreshing.

Say Hey Cafe has you covered when it comes to a satisfying and filling lunch, but don’t forget about the most important meal of the day: breakfast. Many cafes and coffee shops in town offer the usual pre-made, microwave to heat, breakfast sandwiches and wraps. At Say Hey, all of their breakfast sandwiches are made to order with soft scrambled eggs. And don’t worry, if you want to sleep in, you can order in and have Uber Eats deliver a Say Hey breakfast sandwich to your door.

Say Hey Cafe and Deli is open Monday to Friday. Breakfast is served from 8am – 11am, and all other sandwiches are served from 11am – 4pm. Stop by or call ahead to order.

About Bronwyn Lewis 11 Articles
Bronwyn Lewis is a food writer for the Vancouver Guardian. She’s also a screenwriter and producer. Born and raised in Vancouver, Bronwyn lives in Mount Pleasant and you can follow all her food adventures.
Instagram

Vancouver’s very own Zee Zee Theatre, in partnership with a consortium of Canadian theatre companies, is proud to announce they are now accepting applications for the National Queer and Trans Playwriting Unit until July 5, […]

The unsolved murder case of Janet Smith has been a favourite of true crime lovers for decades, and rightfully so. It’s a dramatic story of shoddy police work, corrupt politicians, and even the Ku Klux […]

Now, I’ve never been to Spain, but I have been to Como Taperia. This Spanish tapas bar opened on Main Street at East 7th in 2018. Como Taperia is inspired by time spent eating well […]