La Grotta del Formaggio first opened on Commercial Drive in Vancouver in 1977. They have occupied their current location on Commercial at East 2nd Ave since 1979. In the last few months, the space has undergone quite a transformation. The updated and expanded La Grotta del Formaggio is re-opening the first week of October. This news will be well received by the many loyal fans of Grotta’s deli sandwiches. I have enjoyed these fantastic, customizable Italian sandwiches via Uber Eats while the space was being updated, and every time I shared a mouthwatering photo, I would get messages from friends asking with hope and rumbling tummies, “Are they open again??” 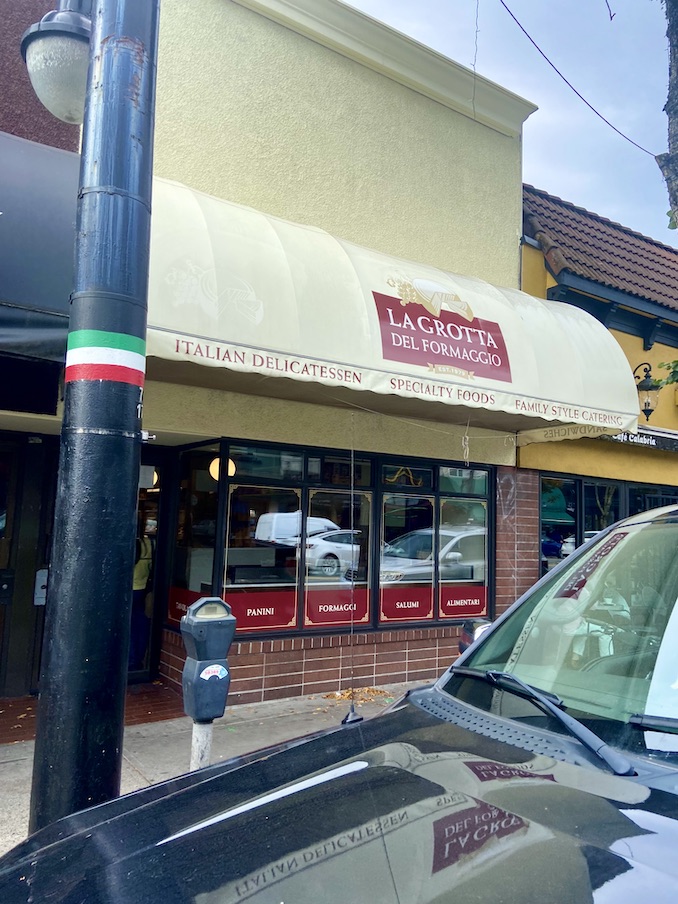 This week, I stopped by to get a sneak peek of the new space. I was impressed not only by the long shelves of Italian goods and the new deep fryer but also by the number of regular customers who knocked on the door and inquired as to the opening date. They were welcomed into the not yet open space for a quick tour even though there was still much to do to get ready. 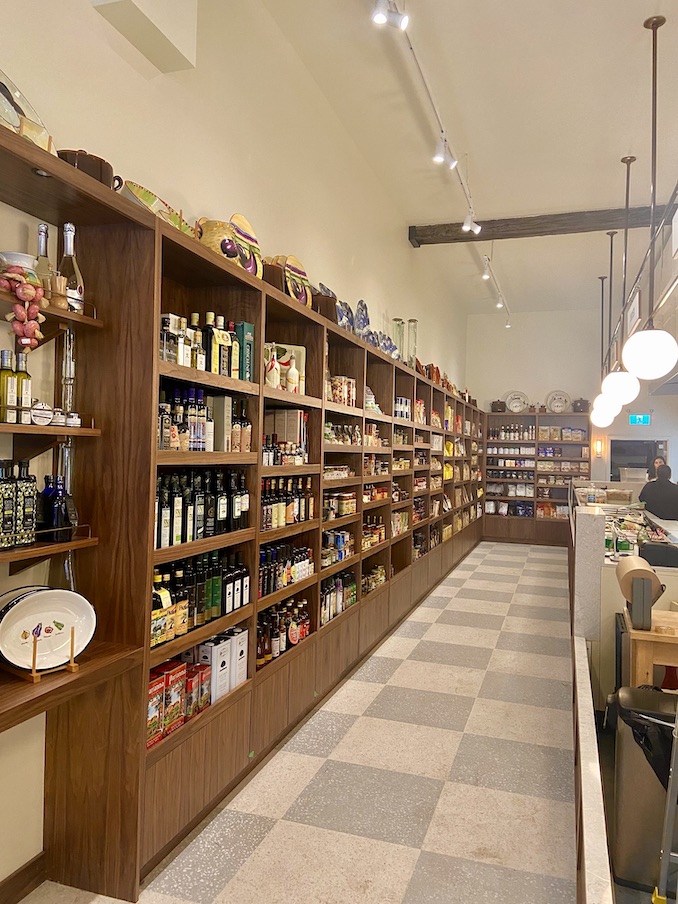 In 1977, La Grotta del Formaggio was opened by Calabrian-born Fortunato “Boss” Bruzzese in the heart of what is still fondly known as Vancouver’s “Little Italy.” Today La Grotta remains a family-run business, with Fortunato’s son Domenico overseeing the wholesale business, and his daughter Sandra heading this latest renovation and redesign. Fortunato is still ever present. He is very much the face of La Grotta del Formaggio, evidenced by a chalk caricature of him on the menu board. His face smiles down from beside La Grotta’s slogan: The Italian Way Every Day — Famiglia, Forza, Formaggio… e Fortunato! This translates to family, strength, cheese, and (of course) Fortunato! 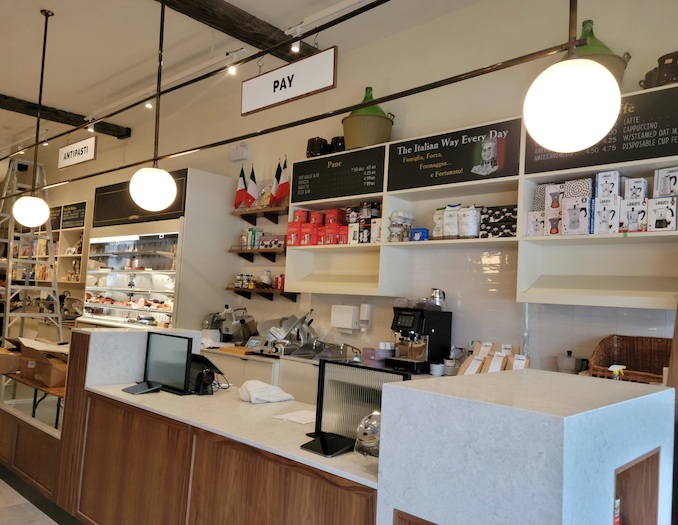 The La Grotta meatballs are deservedly beloved. They come hot in a sandwich, or frozen for an easy, take home meal. One of the reasons they are so delicious is because La Grotta makes them with almost as much grated cheese as high quality beef. La Grotta del Formaggio’s renovation has allowed for more cooking space. The new oven and deep fryer have enabled an exciting expanded menu. As well as the Two Rivers Meats meatballs, more hot food will be available like a Chicken or Eggplant Parmesan. Sicilian Arancini (deep-fried risotto) is another new menu addition. There are three Arancini flavour options: truffle porcini, peas and cheese, as well as a traditional meat.

La Grotta del Formaggio also carries a number of products such as olives, oils, and pastas which are imported exclusively by them. The refreshed Commercial Drive deli is a one stop shop. You can pick up everything you need for a home-cooked Italian meal while also grabbing yourself a sandwich to go, or eat at the counter.

La Grotta is still waiting on one last fridge to complete their meat and cheese display area. The delay is due to the ongoing shipping and supply issues. Otherwise, the space looks beautiful. It is fresh and bright. Enticingly lit display fridges stocked with meats and cheeses line one wall, while along the other are shelves full of Italian products.

The Italian Way Every Day

Photographs of early days of La Grotta create a small gallery by the front door. There are photos of a (slightly) younger and ever dashing Fortunato. Others photos also include his family. The sense of continuity and community at La Grotta is undeniable. It’s clear that the outstanding quality of their products is not the only thing that has kept customers coming back for over forty years. Maybe it’s because they do things the Italian way! 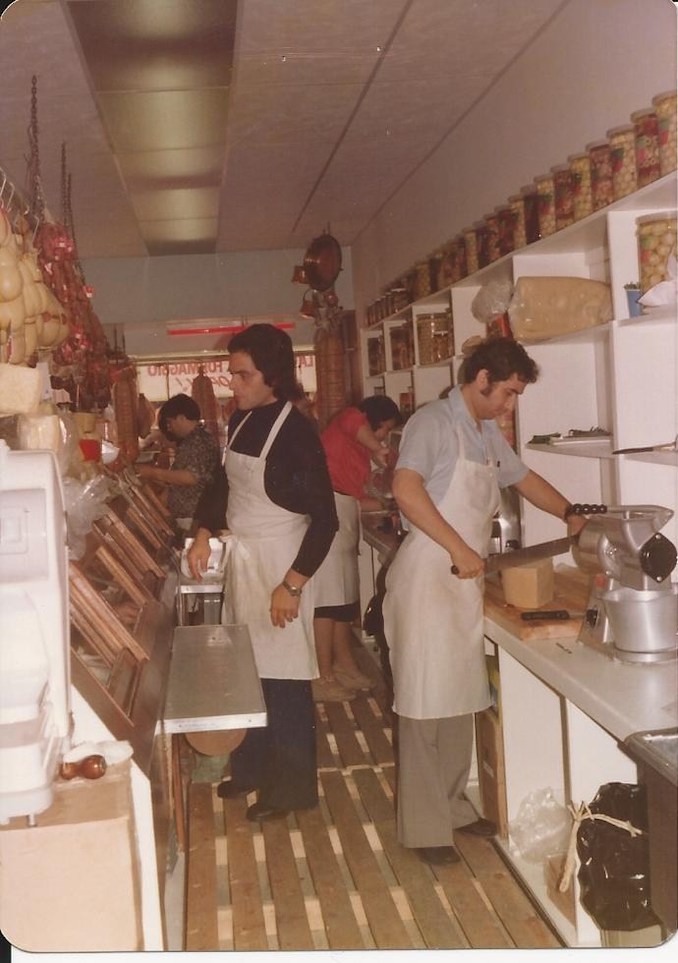 There is a special quality to an Italian deli sandwich. Rivalled only by a Montreal smoked meat sandwich in terms of sheer meat stacking alone, a good Italian sandwich should be a handful. La Grotta offers panini or focaccia. Then you choose your own meat, cheese, and veg. In theory it is like Subway, but in execution the result is far superior. You can also build a mighty vegetarian sandwich. La Grotta has a wide range of veggie toppings like olives, pickled eggplant, artichokes, and sun-dried tomatoes. 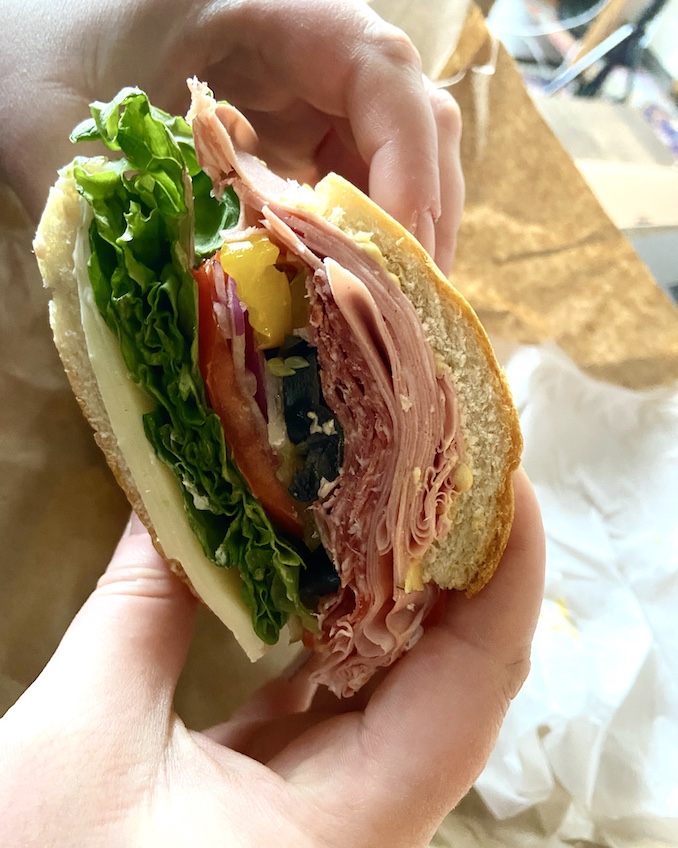 La Grotta del Formaggio (1791 Commercial Dr) will be open as of the first week of October. Go on by and check out the new space. Peruse the shelves, grab a sandwich or some arancini, and say hi to Fortunato!

After browsing the Vancouver archives for our previous history post on Old Photographs of Cars in Vancouver from 1900-1920, I thought I would do a similar post with boats. As there were so many amazing […]

We recently spoke with vice-president and co-founder of Backpack Buddies Emily-anne King to find out more about their charity that provides weekend backpacks of food to kids in need. Describe your charity/non-profit in a few […]