Sophie Buddle is a charming Canadian comedian and podcaster. Her content is original and her delivery is simple yet effective. Her comedy album, “A Lil Bit of Buddle”, won Comedy Album of the Year at the Juno Awards in 2020. If you catch one of her shows, or listen to her podcast “Obsessed with Sophie Buddle”, you’ll understand what the hype is about. 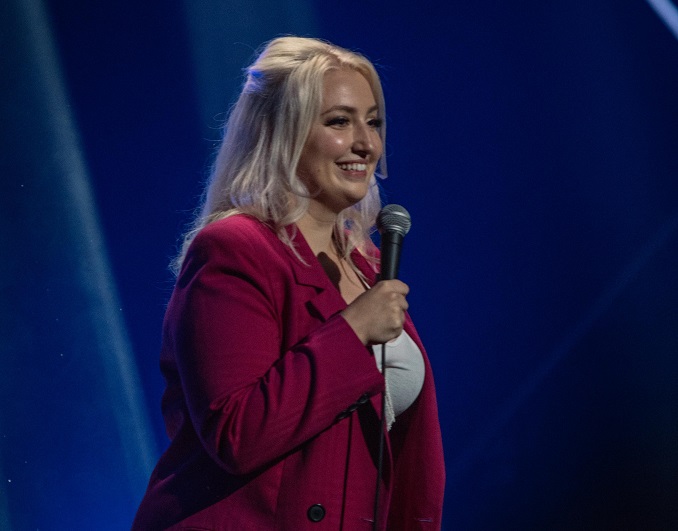 Like all Vancouver comedians I am very low-key. I always brag to comics from other places about how incredible the writing is from Vancouver comics but there is definitely very little movement on stage. You can watch a show in town with some of the best jokes you’ve ever heard but without the performers moving an inch. I fit in the non-movement category. Sometimes I feel like I’m acting so crazy on stage and then I watch it back and I basically just hopped a little one time.

In Canada, my favourite comics who I am heavily influenced by are Erica Sigurdson, Graham Clark, Dino Archie, and Ivan Decker.

There are too many to fully list here, I feel really lucky to be a comedian at this point in time the scene is very potent.

I always loved Patrice Oneal and Ellen Degeneres. May they both Rest In Peace.

Vancouver – it made me the artist I am today. The audiences in Vancouver are very smart and comedy-literate. They seem to have a great sense and knowledge of the art form compared to other cities so you really get to find out what jokes of yours are genuinely good and genuinely bad.

I have a chunk of SA/rapey stuff in my crave special that I feel proud of. It’s something I really want to shed light on and the only way for me to do that is to write jokes about it.

Live shows! No greater feeling than when you discover a comic live.

I live in LA now and my only joke about it is:

In LA there are a lot of people saying “do you know who my father is?” And honestly, I say it too but just because my dad hasn’t really opened up to me like that yet.

My crave special just came out. You can also see my upcoming Rick Mercer gala on CBC this fall and I am on Roast Battles Canada. I also have a podcast called Obsessed with Sophie Buddle where guests come on and discuss their obsessions.