Vancouver’s Rachel Schaefer spoke with us recently to chat about her influences, her favourite places to perform and where she goes to discover new comics. If you love stand up, be sure to support our latest featured local comedian. 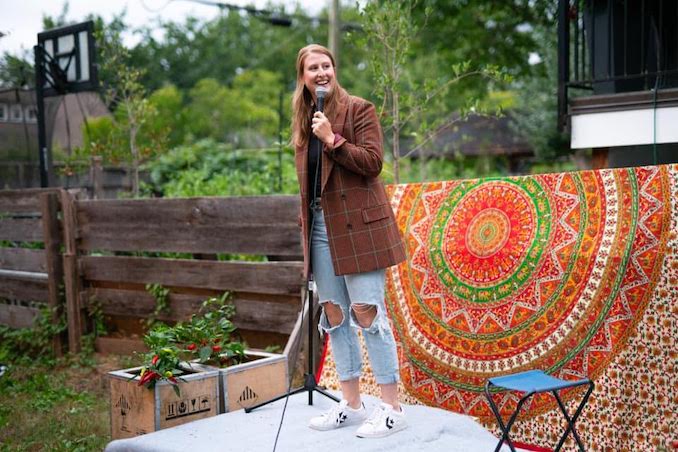 It’s a lot of stories about me embarrassing myself. I never want to take myself too seriously. Or anybody else. We’re all goofy dorks and we should be honest about it. Observational stuff too. I mine my life, but I don’t confine it to that. One of the best things about local comedy is that you hear perspectives that you can’t get from comedians that have “made it”. I’m a server, I’ve worked retail, I’ve worked at the library, so if I’m making observations about living in the world, it’s generally more from a worker standpoint than a consumer standpoint. Let the audience know that the people who bring you beers do remember every dumb thing you do and they will tell their friends and possibly a large group of paying strangers.

Rory Scovel, Tig Notaro, Kyle Kinane, Mindy Kaling, Jennifer Coolidge, Jenny Slate, Tim Robinson, Sam Richardson. I like anything silly and thoughtful. Sassy, but not mean-spirited. Loveable grumps. Give me all that.

I didn’t have television growing up, so my comedy education came very late. I will say, I remember being in the school library in probably ninth grade dying laughing over videos of Katt Williams. My friends and I were obsessed with him and we stand by that choice. People just don’t sweat on stage like that anymore.

Infecting everyone in the green room with my nervous energy and then yelling “WHY DO WE DO THIS?”

My high school choir sang at Carnegie Hall, that’s pretty hard to beat. Oh, you meant for stand up? Silly me with my completely accidental brag. For comedy I’d have to say Little Mountain Gallery (which I’m sure you’re going to hear a lot). It’s a really special ramshackle venue, built and maintained by comedians. It’s the hub of everything weird and funny in Vancouver. They have regular stand up shows or comics can try out whatever bizarre show idea they want and they can trust that the audience will come along. Most recently, I did a show called Hot Takes (shout out to host, Sean McDonnell) where we ate the hottest sauce from the YouTube show Hot Ones and then tried to tell jokes. I ended up chugging a half litre of milk after years of being a strictly oat milk gal and then forcing the audience to promise that if I’m in the line for the bathroom later, they have to get the hell out of my way.

I love twitter for that purpose. You’ll see someone do a great character sketch alone or a group sketch and then follow them and you’ll see the videos they like of other people’s. It’s endless and I love the community driven aspect. Meg Stalter and Grace Kuhlenschmidt are going to run the world one day. Please Don’t Destroy’s Jazz Friday sketch is a delight (pre-SNL).

I’m considering starting a podcast just so that I always have an answer to this question. In general, I would just tell Vancouverites to see every show at Little Mountain Gallery that they can while it is still here. More specifically, I’m currently the three time Vancouver Roast Battle champ, so keep your eyes peeled for the next time I have to defend my title.

In the middle of a much longer joke, I say, “I’m a feminist. Actually, I’m a femiMIST. Any time a dude says something sexist, I spritz him like he’s a bad cat”.

We had the chance to talk with Vancouver comedian Steev Letts about his comedy influences and what he is currently up to. How would you describe your comedy style? I think my style is sweet, […]

Vancouver comedian Alistair Ogden runs a comedy show every month with co-host An-Te Chu at China Cloud Studios. We got a chance to speak with him to find out more about his comedy style and […]