Honolulu Coffee YVR just opened their third location in Vancouver at a new spot on 2nd Ave in Olympic Village. This new location is within a short walk of the False Creek seawall and Science World. 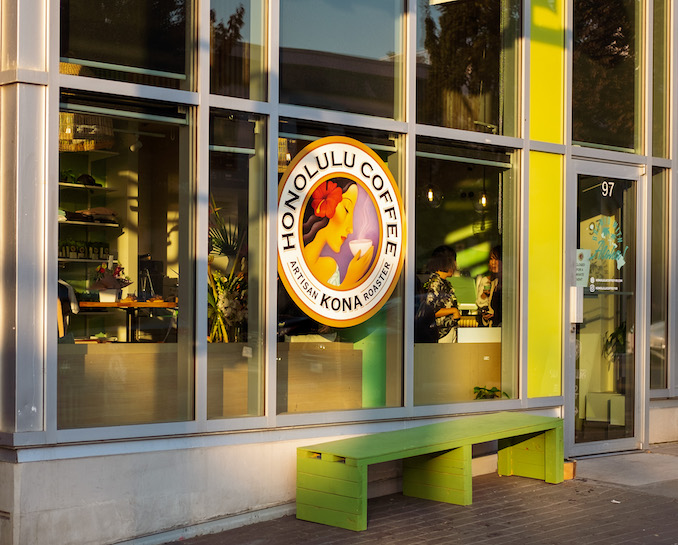 The space was previously occupied by a coffee chain of a different name. Honolulu Coffee has done much more than hang a new lighted sign out front, which is wonderfully eye catching. They’ve also transformed the interior of the cafe space to feel like a tropical oasis, with sea-green walls that match the cups and branded decorative surfboard, and plentiful plants.

Honolulu Coffee YVR is owned by Ming Yang. The coffee is brewed with Aloha, meaning with mutual respect and love. This philosophy also influences the overall vibe of Honolulu Coffee’s cafes. The local chain also serves with aloha, providing a friendly and inviting atmosphere.

Honolulu Coffee has been growing, roasting, and selling their Hawaiian grown beans since 1992. They are a unique producer because they offer a farm to cup coffee experience, as they have their own coffee farm. Their Kona beans grow on the slopes of the Mauna Loa volcano. Then they are dried using the natural process: the outer cherry layer is removed and the beans are left to sun-dry on patios where they are turned every 30 minutes. The beans are then hand-roasted in small batches, ensuring superior quality and taste, as well as terroir. 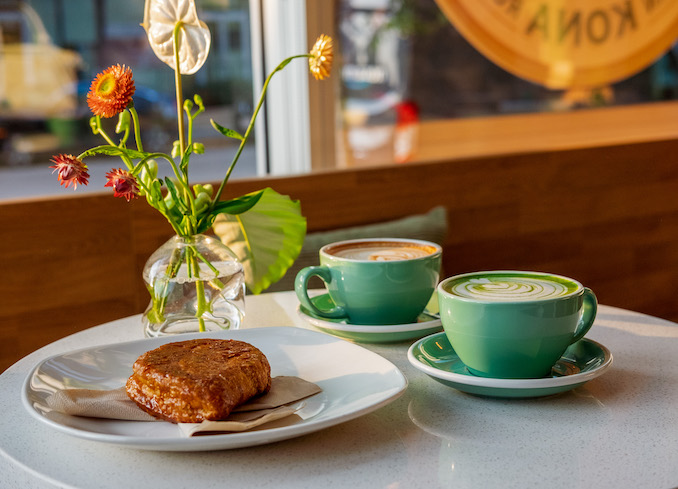 Honolulu Coffee YVR offers both a Hawaiian cold brew and a hot Hawaiian latte, both flavoured with a signature blend of coconut and macadamia nut syrups. Lightly sweet, this combination adds a tropical taste. Pretend you’re beachside in the sun, even on a cold winter day, with the help of these Hawaiian grown beans, and tropically infused milk. If you’re looking for a milk alternative, Honolulu Coffee has your non-dairy options covered, as they offer almond, soy, coconut, and oat milk.

Tea is also on the menu at Honolulu. I always say, the quickest and easiest way to judge matcha is by its colour, and judging by the intense, saturated emerald green of the matcha used by Honolulu Coffee, it is top notch. At Honolulu the matcha latte comes hot or iced. The matcha is naturally grassy and sweet. However, you can add the same coconut and macadamia nut syrups used in the Hawaiian latte if you wish. Paragon Tea supplies the ceremonial matcha for Honolulu Coffee. It comes from Shizuoka, Japan, from farms selected for their preservation practices.

This new location in Olympic Village is a positively tropical space. The sunshine from the tall windows, as well as the light wood used, brighten the space. But this equatorial atmosphere is also aided by the plant selection provided by Aina Floral. Big shiny leafed monsteras and palms, as well as a range of different ferns add to the lush, vegetal feel. String of pearls even hang down from above a seating nook. The flourishing touch comes from the bird of paradise. All of these plants create an indoor tropical ambience: the perfect place to enjoy a hot cup of coffee or tea this winter. 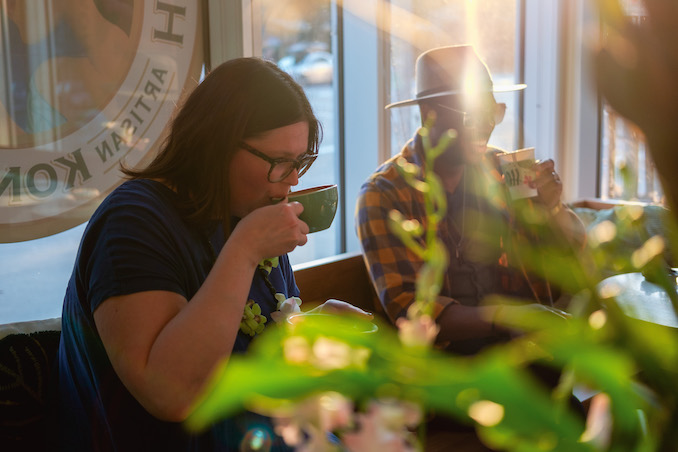 Honolulu’s pastries are transportive. The macadamia key lime pie is particularly decadent. It is not overly rich. The tart lime cuts the nutty richness from the macadamia nut and the buttery flaky pie crust. Local bakery Kukki Jar makes the pastries from scratch. As well as the key lime pie, I also sampled the lemon bichon. A bichon is a French pastry similar to a turnover but instead of being filled with fruit, it is filled with a delectable lemon custard. For those who might want to embrace the Aloha vibes with some fresh fruit instead, Honolulu Coffee also offers açai bowls, as well as smoothies. 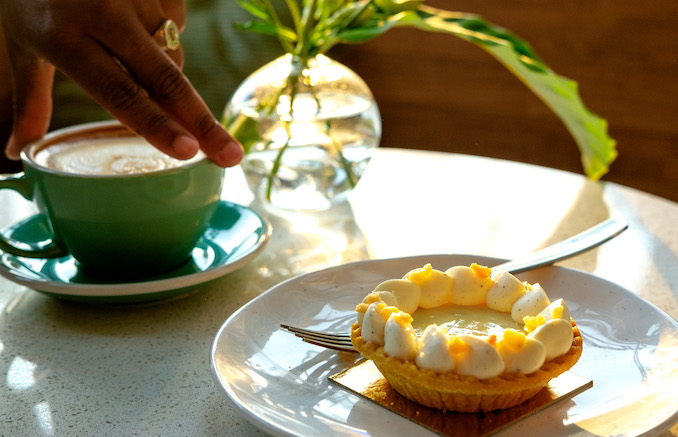 You can grab breakfast or lunch items at Honolulu as well. They have a BF sandwich with bacon, ham, or mushroom, as well as a BF burrito. For lunch, Honolulu Coffee has a selection of sandwiches as well as their pastry offerings.

As well as drinks and sweet and savoury treats, Honolulu Coffee also has some cute merchandise. They have branded hats, sweatshirts, t-shirts, and mugs with a funky hang-loose hula girl logo design. Or, other items feature the classic Hawaiian woman in profile, sipping from a coffee cup.

About Bronwyn Lewis 11 Articles
Bronwyn Lewis is a food writer for the Vancouver Guardian. She’s also a screenwriter and producer. Born and raised in Vancouver, Bronwyn lives in Mount Pleasant and you can follow all her food adventures.
Instagram

Paragon Tea Room gave us their recipe for Iced Strawberry Matcha Latte. This recipe is perfect for the spring and summer! It is easy to make and a great introduction to matcha for those who […]

L’Atelier Patisserie Boulangerie has a new space and a new name. L’Atelier used to be a hidden treasure of Mount Pleasant. They had a tucked away, blink and you’ll miss it location just off Main […]