Kamikaze Nurse is a rock band formed in Vancouver, BC, Canada in 2018 with KC Wei, Ethan Reyes, Sonya Eui, and John Brennan. Named after activist-philosopher Simone Weil’s unfulfilled humanitarian death wish, the band released their debut LP, Bucky Fleur, on Agony Klub in June 2019. Their music has been described as “ethereal skronk,” “Deleuzian rock,” and “best of the ‘90s” by people on the internet and IRL. Their sophomore album, Stimuloso, will be released by Mint Records in June 2022.

Kamikaze Nurse’s evocative integration of melody and noise, along with their interests in poetry, film, and literature, creates a narrative world in which the songs grow to have their own internal logic, reaching beyond genres and conventions. In 2020, amidst the first wave of the pandemic, the band self-recorded the instruments for their sophomore album, Stimuloso, at their jam space over the course of 6 months. Vocals were completed at Raincity Recorders over a weekend, and the album was mixed by Greg Saunier (Deerhoof), who gave Stimuloso its swagger and tooth. While Bucky Fleur established the band’s sound as defiant, fiery, and fierce, Stimuloso takes risks in writerly compositions and playful introspection. 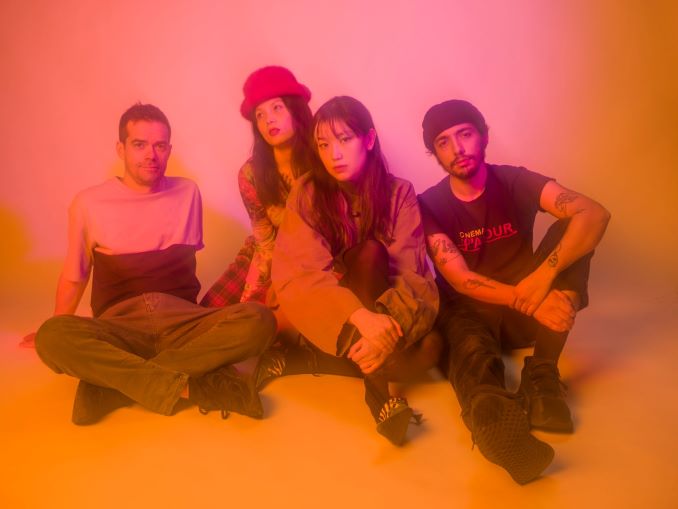 Ethan: there is no such thing
KC: agreed!
John: agreed
Sonya: agreed

John: non
Ethan: poop before playing as the rest of the band is setting up
KC: bilabial trills
Sonya: complaining about everything

Ethan: early burd, I have a full-time labour job…
KC: early bird
Sonya: neither
John: Both

Ethan: Adanac cause I grew up there basically
John: Wall Street, that’s where my first studio was when I moved here.
KC: the Arbutus greenway cuz it’s nice
Sonya: Kingsway is the only right answer

Ethan: Sadly dude chilling because it’s where my friends go
KC: Quilchena Park, has a Euro vibe to me IDK why
Sonya: Brewers Park because it’s right by Kingsway, which is the best street
John: Little Big Beach. Fun bike ride and no one ever hangs there for some reason so it’s usually pretty quiet even though it’s right beside Kits beach.

Gnarfunkel is a Vancouver-based band making waves with their electrifying live shows and unique melange of musical styles. Their sound incorporates elements of funk, psychedelic rock, hip-hop, Latin rhythms, and eastern tonalities in a sound […]

“Five Minutes With” C.C. Voltage of Garage-Punk-N-Roll band, The Spitfires

The Spitfires made a name for themselves in the late ’90s and early ’00s not only for their raucous, beer-soaked live shows but also for their well-crafted rock songs. They shared stages with contemporaries like […]

Spectres are a post-punk band from Vancouver BC that have been on the forefront of the genre resurgence since 2005 and are commonly cited as kicking off the renewed interest in this sound. Emerging from […]