Tunji Taylor-Lewis is a multifaceted Vancouver-based comedian who gained rapid popularity on social media. From hilarious TikToks about celebrities, his mini-series “Meanwhile, Black in Vancouver” and his stand up; Tunji is a force to be reckoned with. This past November, Tunji performed to a sold out show at The Improv Center. We got a chance to chat with him about his favourite comedian growing up and how Vancouverites can’t handle snow! 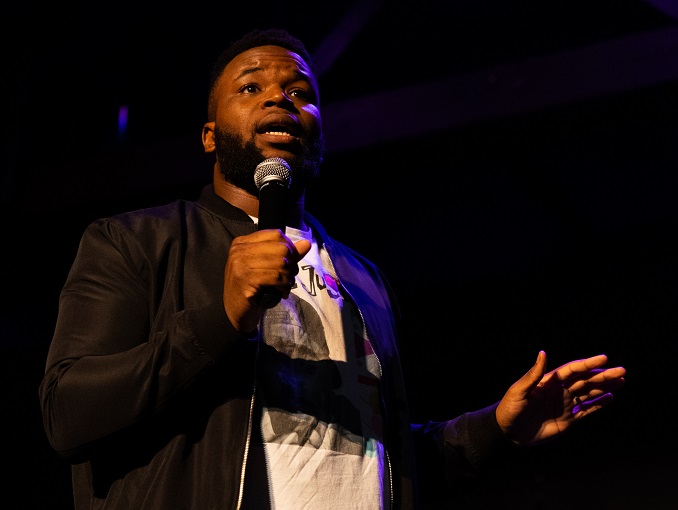 My comedy style is very heavy on characters, skits, and storytelling. When I’m on stage doing my set, I want to take my audience on a journey as if they’re watching a one-man movie

Eddie Murphy and Will Smith are my top influences for sure. My top 5 stand-up comedians in no particular order would have been Chappelle, Chris Rock, Martin Lawrence, Steve Harvey, and Eddie.

Praying, listening to soul music, and drinking a grande flat white with almond milk from Starbucks. It has to be that coffee specifically or else the show will go terribly.

I did an improv show at the Rio Theatre and that was extremely special. It was the largest venue I had ever performed in at that time, and to get laughs in a venue that big and with that much history really gave me a lot of confidence as a young performer.

When I was in university (shoutout to TWU) I did this sketch at our yearly talent show where I played the character of a Spanish Balladeer and my friend Nathan was my sidekick playing the guitar. We sang this dramatic love story to a random girl from the audience and MAN… we absolutely rocked the place. It must’ve been 400 people and they were all dying of laughter. And the cherry on top was that we won the talent show! It was the most fulfilling moment of my comedy career to this day because from that point on there was no doubt in my mind that this was what I wanted to do for the rest of my life.

TikTok, YouTube, and Instagram are awesome places to find new comedians because you can be sure that their success is coming from their ability to resonate with the general public. There’s a lot of great talent out there that deserves more opportunities than their getting right now.

Well, I’m from Vancouver and the way we handle snow every year is definitely a joke. Snow is not new to this city and yet every year it seems to catch us by surprise. It always takes a few accidents and major traffic jams before the government say “you know maybe we should send out a couple snow plows to clear that stuff up.”

Hopefully, by the time this article comes out, I’ll have shows already announced so everyone follow me on Instagram for updates!

Akeem Hoyte-Charles is a good friend of mine and is probably the best pure comedian in the city right now. This dude can hop on stage without anything prepared and still have the audience dying for an hour straight. That is not an easy thing to do at all. Sky’s the limit for that dude.

About Naïka Toussaint 7 Articles
Naïka Toussaint is an avid lover of the arts. She currently works as an actor based out of vancouver. You can usually find Naïka reading, doing pottery or out on an adventure with her dog George Albert.Naïka is working with the Guardian as a community liaison.

We recently spoke with Vancouver comedian Peter Carlone who has a podcast called “This Time It’s Different” on The Sonar Network to find out more about him. How would you describe your comedy style? Honestly, […]

Our latest featured Vancouver comedian Ed Hill has a new one hour special, “Candy & Smiley”, currently streaming on Amazon Prime and Apple TV. We spoke with the local comic to find out more about […]