Nina Wilder is a producer, comedian, and actor. She performs and produces comedy shows in and around Vancouver, and took a moment to speak with us about her style, influences, and her current project ‘Comedy North’! 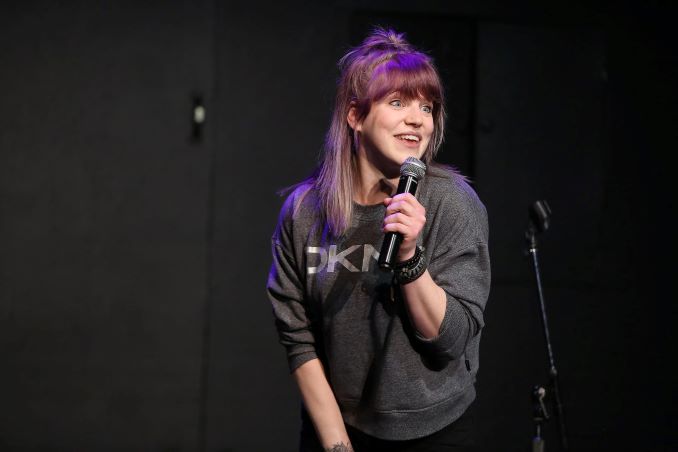 Animated. Very animated. Animated that ranges from bubbly to angsty. Like an angry Powerpuff Girl.

My mom for sure. She’s so quick to a punchline in conversation, it floors me every time. But also, I’m very inspired by local comics that I know, like Marito Lopez for his likability and energy, Sharon Mahoney for her amazing crowd work and “I don’t give a &*$%” attitude, and Simon King for his intelligent opinion on everything whilst being super sharp in his punchlines.

I’m always a fan of Bill Burr and Robin Williams – both together are my “Richard Pryor”. Also major shout out to Iliza Schlesinger – that woman is fiercely funny and I have mad respect for her hustle.

Okay, so I screwed up the last question. I’m just gonna use this as an excuse to say I also love Jim Gaffigan, Tig Notaro, Debra DiGiovanni, and Charlie Demers.

I’m actually on tour right now through Kelowna, Calgary, Edmonton and Golden. I’ve mostly performed in Vancouver and surrounding areas – so I feel I can’t say an absolute favourite just yet. But if I had to pick one, then I’d say any Comedy Ring show (Vancouver). They’re just rowdy and fun and I always have a good time.

Live. Live is the best and really only way to truly enjoy comedy because there are so many nuances to it that involves playing off the audience, the atmosphere – without a doubt, you will laugh more if you watch comedy live.

Well, I co-produce shows all over under Comedy North with fellow comedian, Alisha Dhillon. So anyone can always check out what we’re up to via FB or IG @comedynorthBC

I’m on TikTok now! So you can find me there @ninawildchild or on Instagram @itsanina

Tell us a joke about Vancouver.

I’ll tell you a fact. Did you know that “Vancouver” the name originates from a Dutch name, “van Coevorden” which translates to cow crossing? Makes sense right? Cause the cost of living there is a bunch of Bulls&$!

Nancy Ho, Alisha Dhillon and Velina Taskov are my top picks for you!

For this Vancouver comedian feature we spoke with Abdul Azaz to find out more about his comedy style, influences and where to follow him on social media. How would you describe your comedy style? The […]