It’s the longest day of the year in the tiny arctic village of Pangnirtung, Nunavut. While every adult in town is at the solstice dance, a gang of teenage girls — led by the indomitable Maika (Tasiana Shirley) — must save their home from an invasion of blood-sucking aliens.

Director Nyla Innuksuk’s feature-length debut kicks serious butt. Co-written by Innuksuk and Ryan Cavan, Slash/Back is a freaky sci-fi romp that pays homage to films like The Goonies, Stranger Things, Attack the Block, and The Thing.

Though there are more than a few nods to the classics, don’t expect to wallow in nostalgia. Innuksuk has updated the kids-with-bikes subgenre for the twenty-first century. Pang may be isolated and remote, but Maika and her friends Jesse (Alexis Vincent-Wolfe), Leena (Chelsea Pruksy), and Uki (Nalajoss Ellsworth) struggle with all the challenges of modern adolescence, from Instagram and boys, to texting and annoyingly limited data plans.

The daughter of a celebrated hunter, Maika also wrestles with her Inuit identity. While her friend Uki draws strength from their heritage and loves Pang, Maika feels a growing resentment toward her home and culture. All teenagers grapple with their identities to some extent, and Maika’s frustration is deeply relatable — whether you’re Indigenous or not. However, her feelings are also unique to her Inuit culture and community.

This becomes most apparent when the group attends a party at the house of local teen hunk, Thomassie (Rory Anawak), At the party, Maika rolls her eyes at the traditional art on the walls and declares her preference for KFC over local food.

Like the aliens that threaten the town, shame and self-loathing have the potential to make a person empty and hollow. And, once they take hold, it doesn’t just stop with one person, but threatens the whole community.

After sucking their victim’s blood, the aliens wear their bodies and appear human (or animal). Attracted to thick, black, oily blood, the creatures represent the threat of white supremacist thinking. At the beginning of the film, Miaka is on a dangerous path. She’s internalized the idea that Pang is the “ghetto”, and that whiteness is more desirable than being Inuit.

As a coming-of-age story, Slash/Back leans a bit too heavily on the cliché. There are moments that would be more moving if the viewer wasn’t able to see them coming from quite so far away. Still, while there are few surprises in Maika’s story of self-discovery, the more predictable elements of the plot are off-set by Innuksuk and Cavan’s laugh-out-loud script, and Tasiana Shirley’s energetic performance. 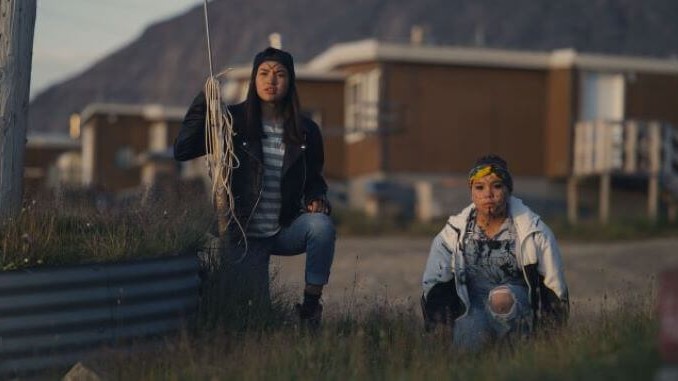 Filmed on location in Pangnirtung, by a largely local cast and crew, the film is also love letter to the arctic. The arctic landscape is almost as much a character in Slash/Back as Maika and her friends. Natural lighting allows the viewer to see the landscape through the girls’ eyes. To them, it is warm. It is home. Dangerous, certainly, but also familiar and comfortable.

The camera captures ice flows, mountains, and fjords in long, sweeping shots that highlight the loneliness and beauty of the location. A fierce, and haunting, soundtrack featuring award winning Inuk throat singer Tanya Tagaq tops off the sensory feast.

Innuksuk knows her stuff. It’s rare to get a thoughtful and fresh genre film debut in such a polished package. Tense, eery, and heart-pounding, Slash/Back is perfectly paced, and the minimal visual effects are positioned for maximum impact. While it isn’t a total gore fest, there are enough gross-out moments to satisfy hard-stomached viewers.

About Shannon Page 14 Articles
Shannon Page (they/she) is a writer, film critic, educator, and digital storyteller who has been teaching and writing about literature, movies, and popular culture for almost a decade. Their reviews, articles, essays, and short fiction have appeared in various online and print publications including WylieWrites.com, Filmotomy, Grain magazine, and Plenitude.

“A Day in the Life” with theatre, film, and television actor, Bronwen Smith

Bronwen Smith and I have worked together for about 25 years. We have produced plays and comedy nights together, acted together, taught together, sold books together, created together. And almost from the beginning, I began […]

“A Day in the Life” with Vancouver filmmaker Lauren Grant

Lauren Grant is well-respected in the Canadian film and television industry for her award-winning films that focus on women in front of and behind the lens. She is a tireless advocate for equity, representation and […]