This week we had the chance to talk with Katie-Ellen Humphries about her influences, style, and what she is currently up to. 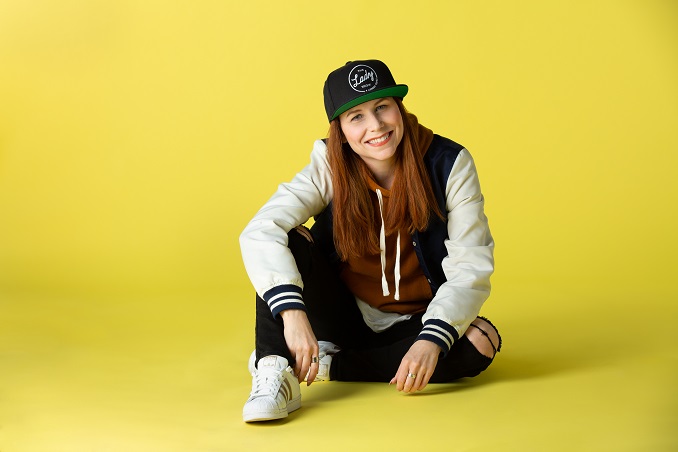 Conversational (if when you had conversation you strategically inserted practiced one-liners) and confessional.

My brother Matt is probably my biggest influence; I basically modeled myself after him in all respects throughout our lives. He lives in Australia currently so I steal his clothes less these days. I also draw a lot of inspiration from minor league baseball, independent wrestlers and the Vancouver independent hip hop scene.

It might sound odd for a choice as a kid, but Richard Pryor. I loved him in movies growing up, before I knew what standup was. Later when I discovered standup I came across his autobiography Pryor Convictions and it was very impactful. Also Miss Piggy. That broad can deliver a line.

I like to listen to femme Pop music while I get ready. The type of upbeat stuff used to sell exercise equipment or played in the trailer for movies where women get their life together after divorce.

The Victoria Event Centre (in Victoria B.C.) will always hold a special place in my heart. That is where I first performed regularly when I was trying to make the transition from student-athlete into the arts. I performed with a group called “Atomic Vaudeville” and got to work with incredible performers who had years of training and for regular audiences who became a really beautiful fan community. It feels like where I became a performer.

My favourite bit is one I closed my album Ladyfinger on, a bit about prostate exam jokes. I initially wrote it for the first “Ride for Dad” Comedy Fundraiser Show in White Horse, Yukon, which is a great event that raises money for prostate cancer testing and education and is a function that became quite special to me. It’s also the first joke I wrote that got a big reaction from both comedians and audiences. It has some gender commentary on double standards in comedy so it says something that is meaningful to me but it’s not only political. It’s a bit sexual while still (relatively) safe for work and as I became a more seasoned performer that joke grew to have a fun act out so it got more and more fun to do.

Nothing beats live. I love to go to an open mic or an amateur night and see new comics coming up. Short of going to live shows I like to find new funny folks on Twitter.

I’ve been trying to get more alone time lately, so I’ve been making plans with friends in Vancouver.

I can’t get enough of Rachel Schaefer.

Vancouver comedian Alistair Ogden runs a comedy show every month with co-host An-Te Chu at China Cloud Studios. We got a chance to speak with him to find out more about his comedy style and […]

Our latest featured Vancouver comedian Ed Hill has a new one hour special, “Candy & Smiley”, currently streaming on Amazon Prime and Apple TV. We spoke with the local comic to find out more about […]

Jon Endo is a Vancouver-based comedian who had his start in entertainment through theatrical sketch comedy and film production. Being of mixed Asian heritage, Jon talks about his experiences and observations of life while poking […]