With a refreshingly honest musical style and a loveable personality, Wayfie is set apart from any other artist because of his unique talents as a multi-instrumentalist & singer-songwriter.

His catchy and heartwarming songs have earned him an award as a winner of Music BC’S Canadian Songwriting Challenge 2020, he is a featured as a singer-songwriter for a Juno Awards nominated EP (Dance Recording of the Year 2021), and he is a finalist in CBC Music’s Toyota Searchlight 2021. 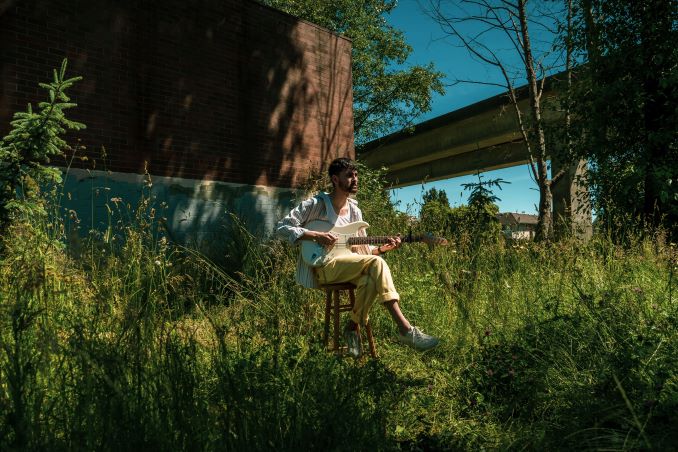 I changed this answer a million times due to my chameleon-like musical nature… but I guess I’ll say my sound lives somewhere under the umbrella of Alternative.

Eyes on Fire (cover song in collaboration with Hahlweg)

As a punky church kid, Switchfoot & Underøath played a big part in my early musical development. I remember getting a Led Zeppelin T-shirt for my 12th birthday, but I was certifiably obsessed with Band of Horses and Explosions in the Sky by the time I was 13.

Lately, I’ve been thoroughly enjoying music from bands like Land of Talk, and BRONCHO. Heather Woods Broderick also put out a song called “Wyoming,” in 2015 and I haven’t been able to shake it from my current favs playlist throughout 2021.

I used to feel guilty for almost exclusively listening to original soundtrack scores and ambient music until I discovered recently it’s apparently cool in the music industry to suffer from intense amounts of daily anxiety?? To which I will say Yalla Habibi by Karl Wolf is my actual guilty pleasure song.

Up to now, I haven’t played enough live shows to have developed any rituals, but I would definitely say deep breathing and tongue stretches have gotten me through the few performances I’ve done so far.

Kid Filthy is a day one for me. Otherwise, my younger brother, who goes by Sløwly, has written some of my favourite songs that haven’t even been shared publicly. A few honourable mentions are Serena Sun, Jacob Hoskins, and Kyross (who is also my brother).

For me I’d say I enjoy listening to LPs cuz there are usually some experimental gems tucked in there. I like when artists veer off the narrow path with their creative choices.

I wrote and produced a song I plan to release in January called, “Compliment.” It’s a song about self-esteem, expectations, and criticism. I’m excited to share it with the world along with a few more singles throughout the rest of 2022.

My favourite street I’d have to say is Old Dewdney Trunk Road in Maple Ridge. I grew up in Maple Ridge and my Dad used to drive Old Dewdney Trunk Road because it was a more scenic way to get from one side of the city to the other. It cut through a lot of the farmland in Maple Ridge (also where parts of 1995’s Jumanji were filmed) and ran parallel to the Cascade mountains. When I close my eyes and reminisce, I can smell traces of manure and faintly hear a 5-year-old me blissfully singing along to the Doobie Brothers’ 1972 classic, “Listen to the Music,” with the windows down in the back of my Dad’s Chevy Suburban.

Stanley Park is a classic, but I tend to hang where I can skate, so perhaps Leeside.

3-way tie between The Orpheum, The Vogue Theatre, and The Biltmore Cabaret.

Long & Mcquade. They’ve got it all.

Born in Ghana, West Africa, and raised between the U.K. and Vancouver, Canada, artist and songwriter, Mauvey, filters his unique batch of alternative pop music with hip hop, R&B/soul always alongside his message: Love. “My […]

With more new music anticipated in the coming months and quickly joining the new generation of Canadian artists getting noticed in the rising pop scene, Madisyn Gifford has already accumulated over 235K Spotify streams and […]

Lozen tells a tale of coming and going, and the fire that comes with reuniting in her newest single, “Something Bout Chu” — available now! A harrowingly romantic combination of what feels like the Dirty […]