Embodying the energy & ferocity of their animal namesake, Hyaenas is a new Indie Rock band breaking into the Canadian music scene. Their 6-track debut EP Little Trophy, produced by Elisa Pangsaeng (Yukon Blonde, Said the Whale) and Jesse Gander (The Pack AD, White Lung), is set for release in early 2023 with singles dropping as of June 2nd, 2022. 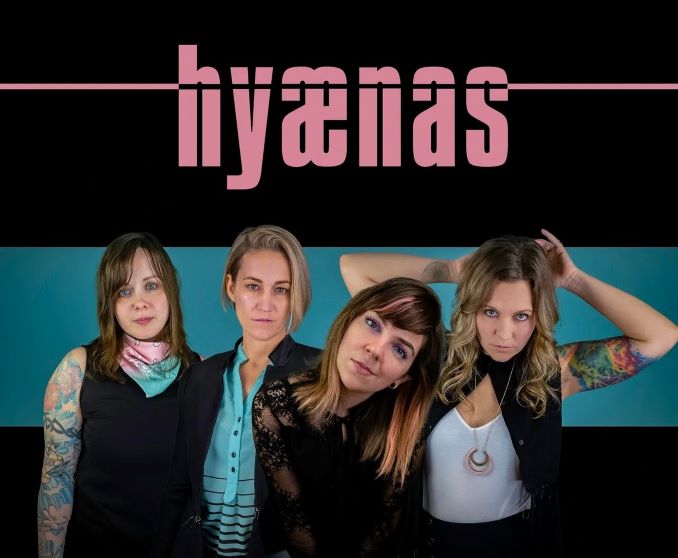 SH: So hard to pick but listening to the most to The Beaches and Wet Leg currently

JF: Have been suuuuuper into this band from Seattle for the last few years called Deep Sea Diver. Their last LP “Impossible Weight” is so friggin good.

SH: Complicated – by Avril Lavigne (and currently OBSESSED with good 4 u by Olivia Rodrigo)

JF: It used to be having a thousand cigarettes in the alley but now that I’ve been a non-smoker for the past few years, probably paradiddles and 1 beer.

LP: A shot of whiskey

JF: Eh I go back & forth. Obviously, an EP with bangers is better than an LP with a few filler tunes…

SH: Early bird – definitely get my best work done then

JF: I WISH I was an early bird. I try so hard. I’ll set an alarm and try to prepare things so I can just roll out of bed and be productive before the rest of the world wakes up but then those chimes from hell go off and my body fuses to the mattress. One day!

LP: Early Bird, but I must have coffee first. Don’t even look at me until I’ve had a coffee!

SH: Ah so hard to pick – the road has higher highs but also lower lows. Probably studio though if I had to pick one!

JF: Studio for sure! Where songs come to life which is exciting plus there is always food and a comfy couch. Although this particular band hasn’t done any actual touring so may the answer will be different after this summer.

LP: Studio… I love pulling the songs apart and getting to know them all over again.

Our first single, Little Trophy, came out June 2nd, 2022 on all streaming platforms

And our live video for For the Birds is on Youtube

We’ll be on the Island June 9th-12th (Port Alberni, Nanaimo, Duncan, Victoria) and you can catch us locally:

July 2nd at the Roxy – w/ Spectator 6 and Not Sisters

July 21st at the Anza Club

JF: Burgoo, Pho Q&M. And Sushi Dragon on Broadway is a wee gem with the sweetest server ever.

SH: Does the sea wall count as a street?

LP: Commercial Drive – walkability, neighbourhood hangouts and I own a tattoo shop called Liquid Amber Tattoo and Art Collective on the drive.

SH: Margaret Pigott Park in Kits – It’s very small and quiet and there’s a huge, gorgeous tree with a bench underneath to sit on peacefully and look at the ocean

JF: Pacific Spirit Park because it has trails but it’s also completely flat so I actually enjoy the walk. And obviously, Stanley Park is real purdy. And anywhere with lots & lots of dogs.

LP: Templeton School is near my house because I have sunset picnics there with my wife.

SH: I would’ve said the Commodore until very recently – but just went to Hollywood Theatre and it’s so great

JF: I don’t think I’ve ever had a bad time at Fox Cabaret. And for bigger shows, The Orpheum is pretty groovy

Cold Fame is an electronic indie pop band from Canada. Formed in 2021, it is made up of Damian Anthony and Cody Dalman. What began as a collaborative recording project to fill the void during […]

If No Doubt had a child with the Red Hot Chilli Peppers and Rage Against the Machine, it would be Raincity. Raincity is a Vancouver-based Rage-Funk band fronted by female leads on saxophone and vocals. […]

“Five Minutes With” rock and roll band, Chase The Bear

Chase The Bear is a rock and roll band from Vancouver, BC that mixes catchy hooks, roaring electric guitars, and hard-hitting rhythms inspired by classic rock with influences of indie, soul, R&B, and pop. The […]