Hollow Twin is dark folk-rock based in Vancouver, BC. The band is fronted by Emmalee Watts and Becky Wosk, who bonded over their old souls and love of classic rock music. The two have been making music together since 2012. Hollow Twin is described as moody, soulful, poignant and haunting. 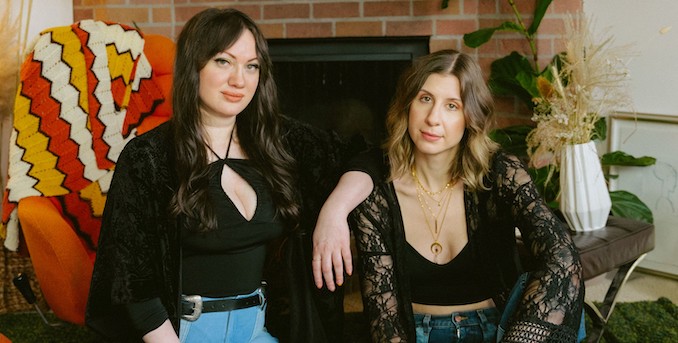 Becky: As a kid, The Beach Boys, as a teen, Fiona Apple.

Emmalee: Avril Lavigne, hands down. Then as a teenager, Jimi Hendrix.

B: This changes often because I admire so many musicians, but right now I would say, Phoebe Bridgers.

E: Mine changes often as well, but my favourite musician at the moment would have to be Novo Amor who I just started getting into.

B: I don’t believe in feeling guilty about listening to music, do what makes you happy.

B: Expressing gratitude and asking the universe for strength to overcome insecurities.

E: I don’t think we really have a set ritual but I guess it would be lots of breathing and encouraging each other.

B: we know so many! This is so hard. I want to name them all. I have to say Laura Reznek.

E: I second that.

B: Both have so many fun aspects! I can’t choose.

E: Same here, both are very distinct experiences, and both are amazing.

Our release show has been postponed due to COVID. Our album Soft Hearts comes out on January 21st.

E: That’s a tough one, but I used to live close to The Naam and that was amazing.

B: It’s a toss-up between Main and Commercial, just some of the best local cafes.

E: For me, it’s Front St. in New West for the same reason.

B: Queen Elizabeth Park, because it used to be a volcano and the flowers are stunning and because one of my previous pets (Art) lives at the Bloedel Conservatory now.

E: Queens Park. I live very close by, it’s perfect for a stroll, and has a beautiful little rose garden!

B: The Fox Cabaret

E: Same here, even though I don’t live in Vancouver anymore.

Favourite music store in your city

E: Always been a fan of Neptoon Records.

Strange Tides is a folk-rock duo from Vancouver, Canada, comprised of Kirsten Bale and Victoria Carbol. Known for their haunting vocals and driving percussion, their arresting debut EP, “Reckless”, depicts a stunning transformation from an […]