Alex Mackenzie has been described as a happy cheerleader. “A genuinely funny man with a sincere desire to spread happiness,” says Stage Whispers Australia. Alex Mackenzie lives in BC, but he could live anywhere! In 2019 Mackenzie quit his six-figure job at the pulp mill, sold his house and moved into an RV to chase his stand-up dreams! Now he is in international demand – Mackenzie tours around the world performing in sold-out theatres. He’s performed at the Melbourne Comedy Festival, is the Host of the Hungry for Laughs Comedy Tour and his charisma and clever joke writing have gained him rapid popularity online that’s increasing daily with his videos reaching over 40 million views! He often gets recognized in public and is asked to move his RV. 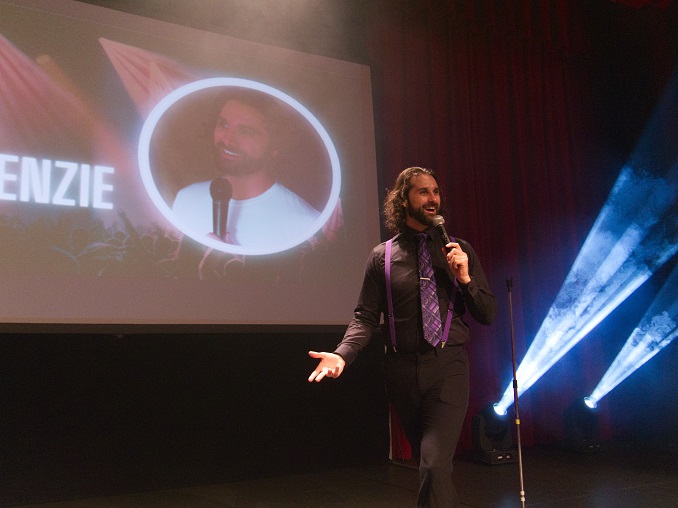 I have been described as a happiness cheerleader or Canada’s Labrador retriever. Here is a quote from a review about my show in Australia “A genuinely funny man with a sincere desire to spread happiness” says Stage Whispers Australia.

My biggest influence growing up was actually Eminem. Just has the ability to overcome obstacles, and have a goal and a dream and he used his art form to develop confidence in the world.

Travis Pastrana was another nitro circus guy. I watched his documentary the 199 lives of Travis Pastrana when I was 20 years old and it made me more open to taking risks and not being ruled by fear ( I actually started skydiving the next weekend ) I am very easily influenced haha, as a kid whatever the last movie I watched was that’s what I wanted to be a ninja, a hockey player a car.

I have also been heavily influenced by Macklemore he inspires me to speak from the heart and to follow my passion.

Eric Thomas is the best, he’s a motivational speaker that gives me the drive to get up every morning and write new jokes and work as hard as I do. There is nobody in the world that can make you want to reach your potential more than my man ET.

Bo Burnham is a big one, he really helps me be more playful with my art also he helped me during some of my darkest days when I was a sad depressed boy trying to figure out life.

I mean it changes almost monthly with so many comedians putting out great work but some of the staples are Bill Burr, Nate Bargatze, Michelle Wolf, Daniel Sloss and Bo Burnham

I used to be a hockey player so I treat performing like an athlete treats a game. I write out my set list the night before and rehearse the day of usually while throwing a ball for my dog Finley at a park. On every one of my set lists I write down 3 things:

-Remember to have fun
-Don’t be afraid to fail
– I Love the Audience and then I write my Moms Loves me and I put a heart around it.

That way if the show goes bad I remember that my Mom loves me I also solve a rubricks cube right before going on. I find it takes my mind off of overthinking and helps me focus.

My favourite place to perform has been the PG Playhouse, I love it because it is my hometown and it’s always so fun to get to go back to Prince George and see all my friends and family and show them what I have been working on. Every time I perform there I feel so much Love.

Ohh the favourite piece I have written is about quitting my job at the pulp mill and selling everything to move into my RV with my Dog Finley to pursue my stand-up dreams. I am proud of it and I love the reactions and kind words I get from audience members after
shows. I find clever is good but when you are speaking from your heart that is what resonates with people.

What is your favourite medium for listening to or finding new comics/comedians?

Hmmm, probably word of mouth. I would say generally my friends will ask if I have seen this person’s new special and that I have to go check it out. Most of the time I will look them up on Instagram and see what they are doing.

Tell us a joke about your city

Ohhh a Prince George joke. I worked at the pulp mill in prince George for years and I always say it was like being on a bowling team. Because we were all a bunch of pinheads who loved talking about our balls. And the whole time we were all hoping for a strike.

YES! I am coming to Vancouver with 5 of my most talented friends with the Hungry for Laughs Comedy Tour on November 11. th to perform at the Hard Rock Casino! We are raising money for a local non-profit and are hoping to donate over $20,000! These acts
are the most talented people in the world they have been on Conan O Brien, The Late Show with Stephan Colbert, Netflix, Toured with Snoop Dogg, Had a residency in Las Vegas with Cirque De Soliel, Performed at MLB and NBA Halftime shows and has even performed for the Queen of England! I would love it if you could tell your friends about it and if you want to get involved or learn more go to www.hungryforlaughs.net.

Jacob Samuel is a Canadian stand-up comedian and cartoonist based in Vancouver whose drawings you can check out on his Instagram or through his published book of cartoons called Slinky Hell. We got the chance […]