For this edition of our Charitable Choices series we spoke with Angie Schick, Executive Director at New Ventures BC, about the work they do helping early stage tech startups. 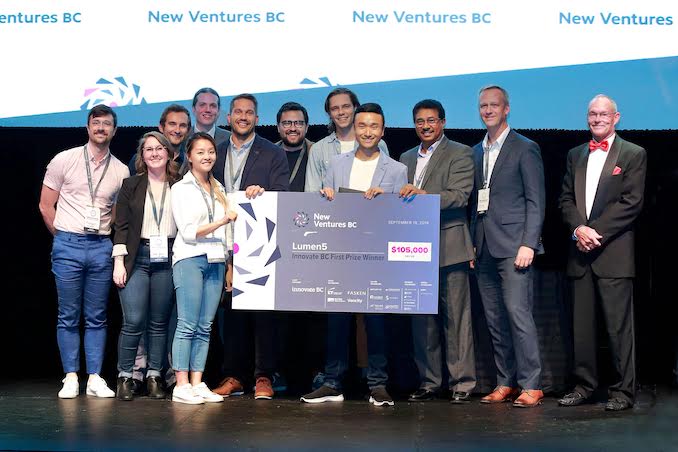 Describe your charity/non-profit in a few sentences

New Ventures BC (NVBC) is a non-profit that helps early stage tech startups grow. For the past 21 years we have run the New Ventures BC Competition, presented by Innovate BC, offering $250,000 in cash and prizes to BC’s top new startups.

In addition, we run a Distance Venture Acceleration Program, as part of the BC Accelerator Network (BCAN), that provides dedicated, 1:1 mentorship; the Discovery Foundation Sales Accelerator program that helps companies grow their revenue; and we just completed running the 3.4M ISI grant program that provided wage subsidies to tech companies to hire post-secondary students.

To date, the New Ventures BC Competition has supported over 2000 companies which have created 8635 jobs and have raised over 1B in financing in BC.

NVBC is here to support early stage tech startups and support tech companies across the province. We give new entrepreneurs the opportunity to get education, mentorship, exposure, recognition, and networking opportunities.

We help everyone from a person with a great new idea to someone who needs some support in getting their first sale, building their MVP, or developing a new marketing strategy.

We aim to provide customizable support, paired with solid education provided by leaders in the field through online education modules and our local network of experts in our annual education series.

I’ve been with NVBC on and off since our first Awards ceremony 21 years ago, and have been administering the organization for the past ten years.

I’ve always been interested in technology, and had the opportunity to get involved through my graduate studies at SFU, studying technology’s impact on communication. I met my professor’s wife, Deborah Kirby, who was one of the original founders, and joined the org then helping out at the registration desk at events. That fun part-time job eventually evolved into my role now as Executive Director (you never know where life will take you!).

Beyond tech, I was also interested in connecting with people and seeing their development. We’ve had companies like Dooly start our mentorship program with an idea, then go on to raise millions in financing, years later. It’s so rewarding to watch their successes–that’s why I continue to stay.

Some notable successes have also come out of the competition, including: AbCellera, MineSense, Aspect Biosystems and Ecoation. Most recently, some other notable winners include Lumen5, Certn, and Jane Software.

Thinking back to the tech landscape ten years ago–there used to be just a few organizations supporting early stage startups. Now, we have a larger ecosystem that works well together–we have a bigger, more robust community.

Initially, fewer companies entered the competition than today—that has really grown. We had around 100 applicants and that has increased to over 200 for the past few years.

Last year, for our 20th anniversary, we put together a video with Pushr video – it shows how the organization became what it is today.

The quality of the applicants, overall, today compared to first half of New Ventures is significantly higher–every year it gets better. Even though it may sound cliché, I can really say that the overall benchmark is raised, year over year.

The additional support of the ecosystem has also grown up. There are a lot of second and third time founders now who have learned more lessons along the way, and many of them generously give back now to the new entrepreneurs just starting out.

We have a more robust support network, with entrepreneurs getting more assistance from other accelerators. All of this, in turn, creates a more competitive competition, gives more exposure to the companies, and more opportunities. It’s like a circle—it makes them improve, while the ecosystem continues to grow.

We still need to do more to increase EDI across all sectors, and also to help scale up ventures. For scale-ups, we’re really only just beginning here.

We could also do more to attract more attention and capital, and better highlight the strength of the ecosystem–we’re strong, but could get more recognition. There are at least 12 or 13 unicorns this year in BC alone!

Our network is open to all and we have free events throughout the year. Come join! You’re welcome to attend events and get involved, either as volunteer, participant in a program, as a partner or as a sponsor.

Depends on when this goes out

PAY IT FORWARD: What is an awesome local charity that you love?

There are so many great non-profit orgs and charities that are doing meaningful work in BC to support BC tech. Some of my favourites:

Discovery Foundation – Support so many wonderful programs and have a strong diversity and inclusion mandate.

We recently spoke with Michael Oliver of MAPS Canada to find out more about their local Vancouver charity that researches and provides public education on psychedelic medicine. Describe your charity/non-profit in a few sentences. Working […]

We recently spoke with Samantha Schumacher of the Vancouver charity Mom2Mom to find out more about their organization that supports mothers living in poverty. Describe your charity/non-profit in a few sentences. At Mom2Mom, we improve […]

We recently spoke with vice-president and co-founder of Backpack Buddies Emily-anne King to find out more about their charity that provides weekend backpacks of food to kids in need. Describe your charity/non-profit in a few […]