Matty Vu is a Vancouver-based comedian whose stand-up has led to stages like Just for laughs, SiriusXM’s Top Comic competition and being featured on The CBC Gem Next Wave of stand-up. We spoke to this cross-stitching nascar loving comic to find out more about his comedy style, influences and exciting new projects! 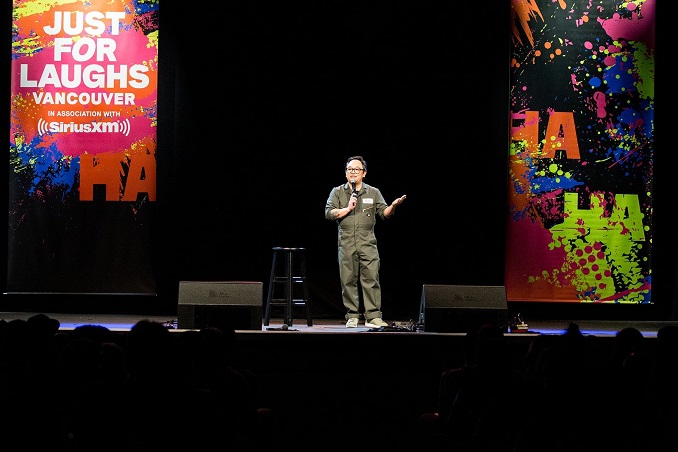 I just try to do or say things that I would find funny. I never know how to answer this question, but that’s all I’m really trying to do out there.

Locally I admire Charlie Demers and Graham Clark. Two of the best comics in town and two of the kindest and welcoming people.

I used to stay up late and watch Dave Letterman and Conan O’Brien on school nights, and they’re probably my biggest influences.

I’m currently obsessed with the show Taskmaster, and find Greg Davies very funny. A fun play between stern and silly.

I like to do some stretching before taking the stage. Just trying to get loose and ready for fun.

Anything I’ve said about NASCAR. Just talking about something I enjoy and slowly getting the audience to also enjoy just a little bit.

Going to watch live comedy shows. It’s the best way to enjoy comedy, so why not see someone new in the best circumstances.

If you want to feel like a street racer, it’s fun to ride the 99 as it passes the 9 on Broadway.

MSG comedy will be part of Just for Laughs Vancouver on February 23, 2023

Randee Neumeyer and Gina Harms. Two of my fav comics to see in life or on stage.

About Naïka Toussaint 7 Articles
Naïka Toussaint is an avid lover of the arts. She currently works as an actor based out of vancouver. You can usually find Naïka reading, doing pottery or out on an adventure with her dog George Albert.Naïka is working with the Guardian as a community liaison.

Alex Mackenzie has been described as a happy cheerleader. “A genuinely funny man with a sincere desire to spread happiness,” says Stage Whispers Australia. Alex Mackenzie lives in BC, but he could live anywhere! In […]