Dylan Rhymer has a knack for taking a complex, serious social issue and giving it a comedic spin, in a way most people would understand. He is not afraid to be critical or edgy making him a very unique comedian today. He has an impressive resume, and has toured all over Canada and has headlined in many places in Europe. 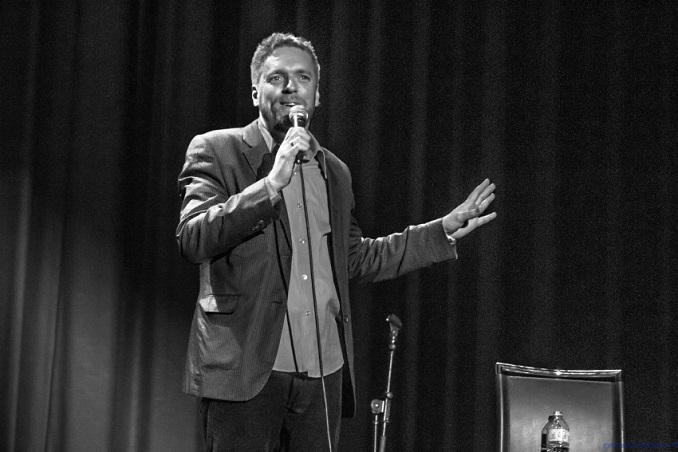 I’ve been described as “political”, which I’ve never been comfortable with because I find politics tedious and depressing. I’m far more interested in social issues and how they affect average people.

When I started in 1993 there was a great local comic named Monty Cohen. He was a bad-ass truth-teller in a leather jacket who smoked constantly. He was absolutely the bravest comic I’d ever met and challenged me to push the envelope. Sadly, he was killed by a drunk driver while out on tour. Not a show goes by without Monty’s ghost whispering in my ear to do better.

I was obsessed with Lenny Bruce. When I was starting out in comedy back in high school I saw an interview with him on A&E and he was just so damn cool. Like Rod Serling but for stand-up. A lot of people write him off as too dated and political, but if you listen to his act it’s full of great act-outs, characters and impressions. He was an incredible showman.

The UK’s Stewart Lee is a genius. Do yourself a favour and listen to Carpet Remnant World. I’ve never seen a comic quite like him.

Empty pockets. Tie shoes. Go to the bathroom about 17 times.

I did a tour of Croatia. On the last night of the tour, we did a show on top of a department store called KONSUM. Not on the top floor, it was on the roof. They had constructed a bar with a stage up there. Onstage there was practically no fence, so if I’d tripped I would have fallen 5 stories to my death. It was surreal. Comedy on the edge!

At the moment I have an extended piece about Roe V Wade and reproductive freedom that I feel compelled to get out there. I wrote it 20 years ago and was hoping it wouldn’t be relevant today, but sadly here we are. And if anyone finds it offensive, I’ll stop performing it when they stop forcing me to.

Vancouver is so expensive that even homeless people are paying rent.

I have a new album called MACRODOSE that I’m pretty darned proud of. It was produced by the great Kevvy Maher who has been behind many great Vancouver comedy albums. It’s on the usual platforms.

Shirley Gnome’s album Decoxification is regularly on my playlist. She’s brilliant. Nobody is doing what she does.

We recently spoke with Vancouver comedian Peter Carlone who has a podcast called “This Time It’s Different” on The Sonar Network to find out more about him. How would you describe your comedy style? Honestly, […]

We recently caught up with Vancouver Comedian Amber Harper-Young to chat about her favourite comics, her best bit and where we can check her out next. How would you describe your comedy style? My comedy […]

This past summer Vancouver comedian Tin Lorica recorded a compilation album with JFL Originals alongside other BC comedians called “Stand-up BC: Grossly Underfunded Circus”. We got to speak with the local comic to find out […]