SWAN Vancouver Society is a unique registered charity aimed at providing culturally specific support and advocacy to im/migrant women engaged in indoor sex work. SWAN prioritizes a woman’s own personal experiences and their own self-identified needs to better understand how to serve them. We spoke with Alison Clancey, executive director of SWAN to learn more. 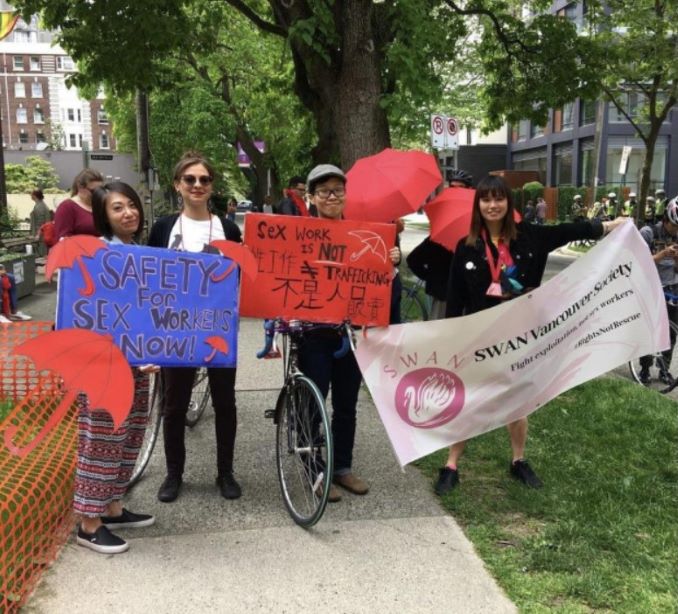 Describe your charity/non-profit in a few sentences.

SWAN promotes the rights, health & safety of im/migrant women engaged in indoor sex work through front-line service & systemic advocacy. We provide outreach services to women working in massage businesses and other indoor locations where sex work occurs in the Lower Mainland (Abbotsford to Richmond). SWAN has also had a robust online outreach service for several years, which meant SWAN was well-positioned to address the challenges the pandemic presented when remote service provision was required. In addition to our front-line services, SWAN works tirelessly in advocacy and policy realms to increase im/migrant sex workers’ labour and legal rights and health access and reduce systemic racism.

Due to multi-layered criminalization and stigmatization, im/migrant women who do sex work experience violence at much higher rates than other women in society. Excluded from legal and labour rights, the lack of state protection systemically creates situations ripe for violence and exploitation. The women who access our services are shunned and judged in society based upon gendered, classist and racist stereotypes and misinformation that result in anti-sex work attitudes that dehumanize. These attitudes permeate every aspect of these women’s lives and result in their marginalization on the fringes of society. SWAN works to address the judgement and exclusion the women who access our services face. Through public education to address stigma and advocacy to change laws and policies, SWAN promotes inclusion and understanding in the hope that someday racialized sex workers will be accepted as members of our communities like other residents and workers.

.I joined SWAN in 2009 as an outreach volunteer, however, SWAN is celebrating its 20th anniversary in 2022! SWAN grew out of a pilot community health care initiative that extended health access and outreach to local massage businesses. During the initiative, SWAN volunteers recognized that women working in massage businesses were dealing with a host of issues that were much broader than health. The issues that were most important to women in massage businesses were the law, employment, immigration, and safety concerns among others. At the end of the initiative, the volunteers recognized how important outreach work was and decided to continue working together. In 2008, SWAN incorporated as a BC non-profit society and in 2017, SWAN became a registered charity.

I lived in Asia for many years where I got to know many sex workers. I returned to Canada and furthered my studies in order to learn more about international migration, sex work, labour rights and related issues, which were at the time (and still) being confused as ‘sex trafficking. I joined SWAN because SWAN is a member of the Global Alliance Against Traffic in Women, a network of over 80 non-governmental organizations from all regions of the world that takes an evidence-based, labour rights approach to its work. Meeting so many im/migrant sex workers at SWAN, I quickly learned that what many people were calling migrant ‘sex trafficking’ in Canada was actually labour issues in the sex industry that needed urgent advocacy and policy change. All these years later, I am still as passionate about this issue as I was on my first day as a volunteer at SWAN in 2009.

Im/migrant sex workers had few options to access non-judgemental employment, health, social, immigration, legal and criminal justice support in the community. SWAN filled this void by offering low-barrier, sex worker rights-centred services. Back in 2009 when I started, law enforcement raids carried out on massage businesses in the name of ‘rescue’ and protection were rampant with no oversight or accountability. Over the years, SWAN worked tirelessly to educate law enforcement that im/migrant sex workers were not asking to be rescued from the means in which they were earning a living and a more informed approach to address their actual criminal justice needs (not trafficking) was needed.

Unfortunately, the criminalization and stigma im/migrant women who do sex work face has not changed much and perhaps has even worsened over the years. There has been a societal, legal and legislative shift from seeing sex workers as ‘criminals’ to seeing sex workers as ‘victims’. Arguably, this shift to ‘victimhood’ has been more detrimental to im/migrant sex workers as it has enabled the state to racially profile and over surveil, all in the name of ‘protection’ in ways that aren’t often critically assessed by society at large. Advocacy for the decriminalization of the sex industry, which would provide sex workers with labour and legal rights, remains a very important part of SWAN’s work.

While society is shifting in how it understands people living with HIV, mental health issues, substance use, homelessness and other issues, the understanding and acceptance of individuals doing sex work has not improved much over time; sex work stereotypes and stigma are still widespread. I ask that people self-reflect on how their own values about sex in general, in many ways still an uncomfortable topic for some, maybe inadvertently contribute to the misunderstanding and exclusion sex workers experience. Oftentimes people project their own moral values about sex onto sex workers without fully comprehending the complexity of the sex industry.

SWAN will be participating in the annual Red Umbrella March, which marks the National Day of Action in support of sex workers on Saturday, June 11, 2022, 2 pm at the Vancouver Art Gallery, South Plaza, Robson Street. We invite the general public to come out in solidarity with the sex work community and have ideas about sex work challenges!

PAY IT FORWARD: What is an awesome local charity/non-profit that you love?

Women in Animation (WIA) is a Vancouver not-for-profit dedicated to advancing women in the field of animation. We spoke with Rose-Ann Tisserand,  Founder, Co-Executive Producer and Board Member at WIA, to find out more about […]