The music of Evil Tongues exemplifies a gritty cinematic sound expressed through soaring anthemic melodies and raw personal lyrics. Members Jennifer Di and Mike Allain come from the same Toronto music scene. The two bonded over their shared eclectic tastes in music and saw the opportunity to collaborate on a new project that drew inspiration from sounds that defined the 80s and the UK music scene.

Following the collapse of the music industry caused by the pandemic, the passion project they started in 2017 became their main focus. After dedicating 2020 to writing, the duo relocated to the West Coast in 2021 where they recorded with platinum-certified producer/engineer Nygel Asselin at NYG Studios in Vancouver. They took full advantage of the array of vintage synthesizers available to them to lock in the analog sounds of the 80s that would define Evil Tongues. 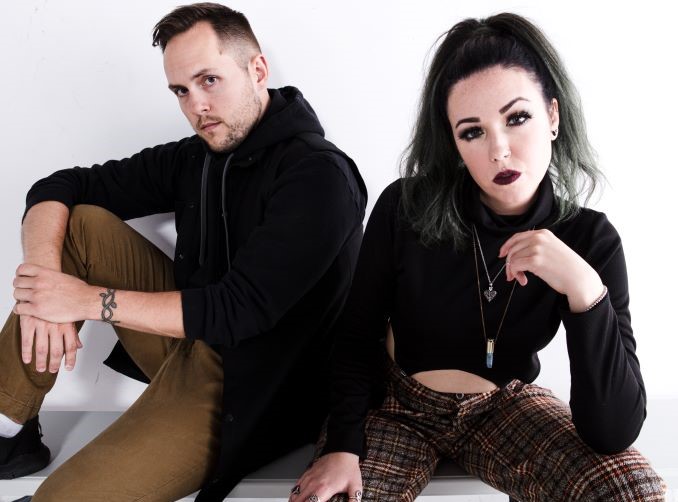 Mike: – Funny enough my love for music started with Limp Bizkit and branched out in every direction from there. Lyrical content and profanity aside hearing the intro to their song Hot Dog for the first time changed everything for me.

Jen: – The very first band that I remember obsessing over as a kid was The Smashing Pumpkins, specifically their song Rocket.

Mike: – The infectious groove of Regardless by RAYE gets me moving every time.

Mike: – Coffee, light stretching, and questioning why I decided to be a drummer (so much gear to lug around).

Jen: – Hot lemon water with honey, vocal exercises, tongues stretches, body stretches. As a singer my whole body is my instrument so I have to make sure it’s warmed up and ready to go.

Mike: – I’m still getting to know the Vancouver scene but I’m really digging everything Dacey’s been putting out.

Jen: – Needles//Pins has been my favourite local Vancouver act for years now, I own all of their albums on vinyl

Mike: – I still love and prefer listening to LPs.

Mike: – Even though I’m a musician and sound guy who thrives in the night, I’m definitely and oddly an early bird.

Jen: – No question, I am a night owl. There’s something addicting about the stillness of a city when everyone is asleep. It’s when I’m the most creative.

Mike: – My bags are packed and ready, where to next?

Jen: – I love waking up in a different city everyday, once you’ve been on the road it’s hard to fully be satisfied with normal home life.

To fully immerse in the multitudes of Indigenous rising star Nimkish is to honour the past, look ahead to the future, and bask in the resplendent present all at once. The Vancouver-based marvel-in-the-making is fearless […]