Amanda Sum (she/her) is a performer and creator who dances between theatre and music. She is based in Vancouver, on the unceded territories of the Musqueam, Squamish, and Tsleil-Waututh Nations. As a musician, Amanda’s writing floats on top of the indie-pop genre, sometimes dipping into jazz or visiting alternative folk. Her music has been played on CBC Radio, and in 2021, she performed at the TD International Jazz Festival. Her debut single and music video, Groupthink, was released in September 2020. Amanda’s debut full-length record, New Age Attitudes, will be released on September 9 2022. She aims to champion other under and misrepresented artists in her music work. All her sound recordings were made with an all-female production and engineering team, and feature an all-Asian female band. Music recording collaborators include Emily Millard, Olivia Quan, Jamie Lee, Mary Ancheta, Cindy Kao, Shin-Jung Nam, Ginger Chen, and Elisa Pangsaeng. Amanda’s music has brought her to be featured in Fluevog, The Vancouver Sun, Vancouver Magazine, booooooom.com, and Stir Vancouver.

As an actor, Amanda’s recent credits include The Wolves (With A Spoon/Rumble/Pacific), Chicken Girl (rice&beans), 3 seasons of the East Van Panto (Theatre Replacement), and do you want what I have got? a craigslist cantata (The Cultch).

Amanda has collaborated on many interdisciplinary theatre-based works, which have brought her to perform at On The Boards (Seattle), the Fury Factory Festival of Ensemble and Devised Theatre (San Francisco) and Summerworks (Toronto). Past devised works include Other Inland Empires (Swim Club), New Societies and Champion (re:current theatre), and Double Happiness: Detour This Way (Nancy Tam & Robyn Jacob/Music on Main/plastic orchid factory/Neworld Theatre). Amanda holds a BFA in theatre performance from Simon Fraser University.

Amanda is Theatre Replacement’s current COLLIDER Artist in Residence, developing New Age Attitudes: Live in Concert, a “pop-up book performance and concert in construction paper form”. This piece has been in development since 2020, and full production is set for 2023.

Amanda dips between disciplines, and values collective opportunities, chortling laughter, matching outfits, rhythm and rigour across all mediums she works with. 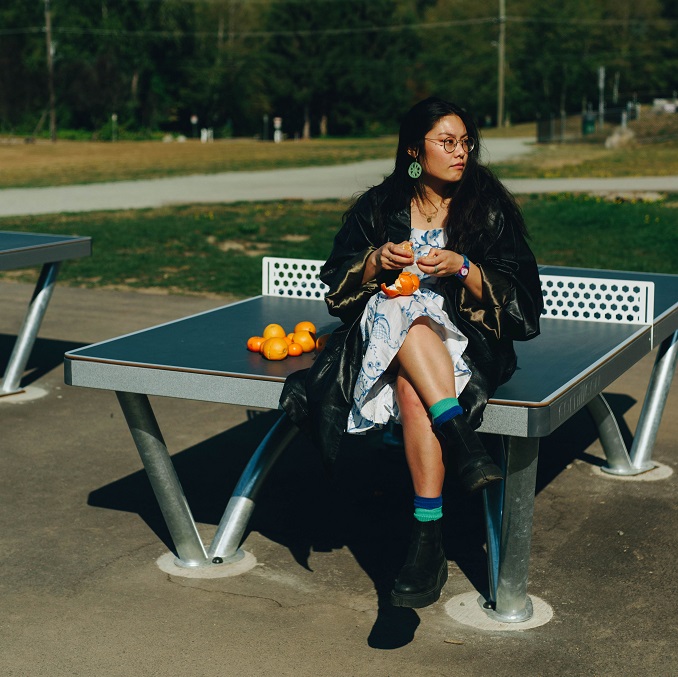 Favourites are tricky but I did notably love Anne Murray, Jann Arden and Celine Dion

I’ve been listening to a lot of YEBBA and Audrey Nuna lately.

Since U Been Gone by Kelly Clarkson (but I truly don’t feel that guilty).

Ginger tea with honey and a fun outfit.

SO MANY! But right now I’m so excited about Wallgrin’s new album!

LP! That can stand for Long Play or Love! Perfection!

Neither, I’m big on sleeping.

Tamam on Hastings or Anh and Chi on Main.

Commercial Drive because you always bump into someone you know!

Trout Lake has many meaningful memories tied to it for me.

I’ve seen some great shows at the Commodore, and The Vogue has comfy seats.

The staff at Tom Lee in Richmond are very kind! Oh and I just recently got a record player, so I’ve been popping into Highlife and Audiopile on the Drive.

Stuttr is a four-piece experimental Alt-Rock Post Punk Band founded in 2018. They have described themselves as Vancouver noise makers. They just released their latest EP, and we had the chance to catch up with […]

Hunting Giants is a four-piece rock metal band whose purpose is to inspire the personal evolution of listeners. Charged with revitalizing music that fuses genres and garners fevered attention, Hunting Giants offers an explosive visuals-driven […]

Born in the dive bars and alleyways of East Vancouver, BRASS is a punk/hardcore band known for their energetic and sweat-soaked shows fuelled by shout-along anthems and heavy-hitting riffs. While growing a following around Western […]