We had the chance to talk with Vancouver comedian Steev Letts about his comedy influences and what he is currently up to. 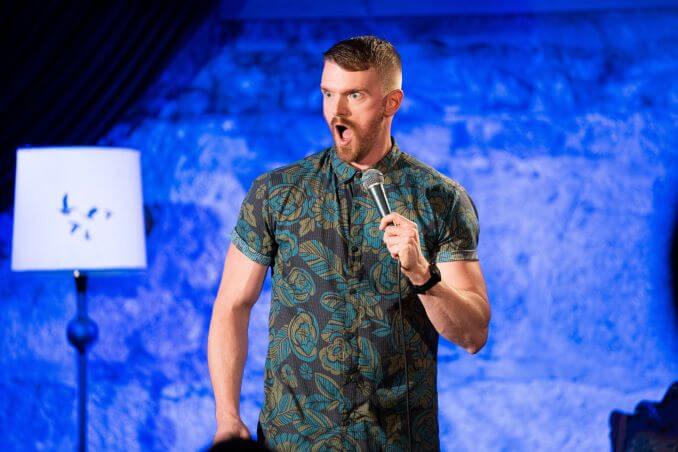 I think my style is sweet, dirty, and very gay. Like a lollipop that got dropped on the floor at a bathhouse.

Conan O’Brien, Chris Rock, Tina Fey, Dave Chappelle, Louis CK. Not saying they’re all good people, but they’re all influences. Margaret Cho was the first live comedy show I ever saw (Notorious CHO tour, 2001) and it was the gayest, most joyous thing I had ever witnessed. That had a huge impact.

Chris Rock and Dave Chappelle were co-GOATs in my eyes. Chappelle’s Show was a cultural juggernaut and Rock’s Bigger & Blacker and Never Scared still hit so hard.
Who is your favourite comedian now?
It changes all the time. As of this week, I’d say, Jerrod Carmichael. I went into watching his special Rothaniel with huge expectations after hearing all the hype and it still blew me away.

Mine is pretty tame. I always shower and put on fresh undies before I leave for the venue, and I travel with an extra shirt in case I sweat through my first choice. I used to drink four beers and incessantly repeat my setlist right before going on, but now that I’m sober I’ve substituted a bag of gummy candies for the beers. It’s still not “healthy”, but at least sour patch kids don’t make me slur my words or crave cocaine.

My favourite city to perform in is Kamloops. Their pride shows are always special, and the area is just teeming with lonely roughnecks, which is right up my alley. My favourite venue to perform at in Vancouver was the Comedy Mix (RIP), but if we’re talking still-standing venues, Comedy After Dark on West Pender and Heckler’s in Victoria are where it’s at.

I have a newish bit I’m doing about legal weed dispensaries and what it would look like if the government started sanctioning brothels. I’m not sure if proud is the right word, but I like that it’s a well fleshed-out bit with a couple twists and it hasn’t yet bombed on me.

I guess TikTok and Instagram are the only ones that come to mind. Life is too short to trawl YouTube and you’re more likely to get indoctrinated into a cult than find anything worthwhile there. Following comics that highlight other people’s work helps. My buddy Dan Duvall (@lazerdoov on Twitter and Insta) is great for that. . Also, on a local level, Comedy Here Often is a label and show producer that showcases so much great established and up-and-coming Vancouver talent.

For free? In THIS ECONOMY? No.

I have a set on season 2 of New Wave of Standup which is currently available on CBC Gem and I’m opening for Debra DiGiovanni at the Hollywood Theatre on May 2nd.

KC Novak. She’s sharp as a tack and wears the hell out of a catsuit.

Ed Hill is a Vancouver-based comedian, born in Taiwan. In 2021, Ed became the first comedian of Taiwanese-Canadian descent to release a full one-hour comedy special titled “Candy & Smiley” with Comedy Dynamics. The special […]

Dylan Rhymer has a knack for taking a complex, serious social issue and giving it a comedic spin, in a way most people would understand. He is not afraid to be critical or edgy making […]

Tunji Taylor-Lewis is a multifaceted Vancouver-based comedian who gained rapid popularity on social media. From hilarious TikToks about celebrities, his mini-series “Meanwhile, Black in Vancouver” and his stand up; Tunji is a force to be […]