Vancouver comedian Alistair Ogden runs a comedy show every month with co-host An-Te Chu at China Cloud Studios. We got a chance to speak with him to find out more about his comedy style and influences, as well as where he goes to discover new comics. 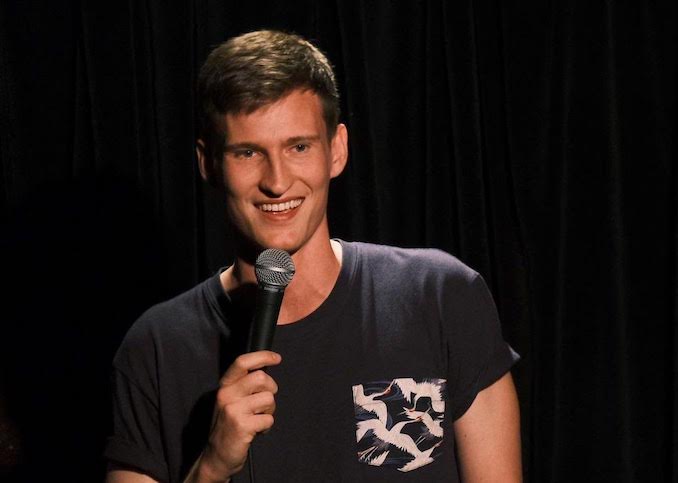 Cheeky, laid-back, a little anxious. Desperately trying to have fun.

I loved John Cleese. Monty Python and Fawlty Towers were on all the time. We also had this random VHS of a short film he did called “Double Bass” which was hilarious and also my first time seeing nudity on TV. Very enlightening.

Rory Scovel. His specials are fantastic and he was even better when I saw him live at the Rio in 2020.

I usually get quite anxious and go to the bathroom a bunch of times. Just peeing, mostly.

I did the “Gala of Laughs” at the Spatz Theatre as part of the Halifax ComedyFest in 2019. Mark Critch gave me a hug after my set. I almost cried, it was so heartwarming. Also my first TV taping, so that was nice, but mostly I enjoyed it cause I got to hang out with a bunch of Canadian comedic icons. It was a truly wonderful time.

Nothing beats going to live shows. Even when I’m not performing, I like to pop into venues around Vancouver to watch people I haven’t seen before, or comedians visiting from out of town. Go watch live comedy. It’s so much more fun than sitting in front of your TV, or laptop, or phone, or Apple Watch.

Come to ComedyPants! It’s a show I run every month with my co-host An-Te Chu at China Cloud Studios. We pick our favourite comedians from the city and have them all perform in a loft space on Main St. It’s very fun.

The January 7 show has been cancelled. The next show will be on February 4th.

This feels oddly… threatening? I’m not going to write out a whole joke cause that feels weird but instead here is a short film I made: https://www.instagram.com/tv/CHA3ReYBx55/

There are truly so many. Nathan Hare! An-Te Chu! Andrea Jin! Aaron Read! Danika Thibault! Malik Elassal! I could go on for paragraphs. Just go to @itscomedypants and follow everyone we have on our shows.

We recently got the chance to interview Vancouver comedian Sasha Mark to find out more about their comedic style, influences, and where he goes to discover new comics. If you love comedy, be sure to […]